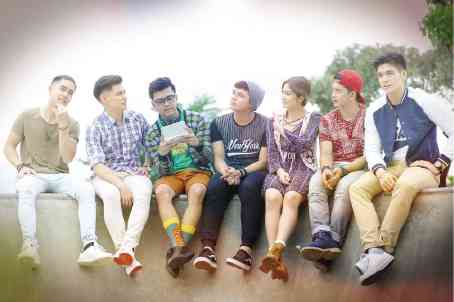 Whether they’re about friendship, romance or relationship with parents, the issues that concern young people today aren’t drastically different from those of the previous generations’, according to television director Linnet Zurbano.

Only this time, technology plays a crucial role in how such things are dealt with, Zurbano added.

That, she said, is what she aims to highlight in the coming-of-age, barkada series “Trops,” which stars show biz newbies, including the Filipino-Japanese talent Taki and “Eat Bulaga’s” all-male group The Baes, which is composed of Kenneth Medrano, Kim Last, Tommy Peñaflor, Miggy Tolentino, Joel Palencia and Jon Timmons.

“Millennials meet new people or court each other through social media. They gossip using chat applications, and at times, even fight over Facebook posts,” she told the Inquirer in an interview. “We used to do these things, too—but in a more personal way. That’s what has changed.”

And how exactly does the daily morning program present the online interactions and dynamics among the characters? “Fortunately, computer-generated graphics and effects are now readily available to us,” said Zurbano, who also wanted to delve into how social media has seemingly made millennials increasingly hungry for affirmation and attention.

“We didn’t have a way of promoting ourselves during our time. Now, people upload OOTD (outfit of the day) photos. Back then, we confided our thoughts to our friends or family. Now, we can tell the whole world about it,” she related.

“Eventually, it morphs into a competition of sorts—who can get the most likes; who is unique; who appears smarter, more beautiful; who can post the most hilarious hugot lines,” added Zurbano, whose treatment of “Trops” is largely inspired by one of her favorite television series, the wildly popular Taiwanese drama “Meteor Garden.”

Apart from giving a glimpse of what goes on in the lives of millennials, “Trops,” which is produced by TAPE Inc. for GMA 7, hopes to bridge the gap between this generation’s parents and their children.

“We often hear parents say, ‘Noong panahon namin (During our time)…’ And that’s exactly the point, it’s not our time anymore. And I think it’s parents—like me—who have to adjust to how things are done now,” pointed out Zurbano, who herself is a mother of a millennial kid. “We have to adapt, put in the effort to know the language they use or their interests—the better to hold their attention.”

But of course, “being progressive” doesn’t necessarily mean disregarding basic values in life. “It also tries to instill the importance of love and respect for family and the people around us,” Zurbano said.