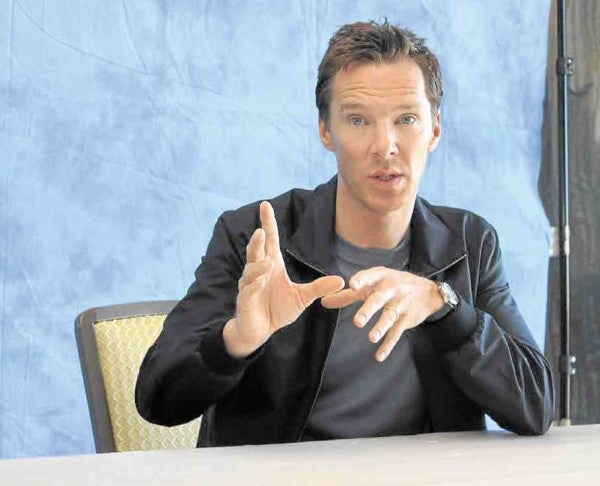 Los Angeles—“Yeah, I woke up a completely different person,” quipped Benedict Cumberbatch about turning 40 this year. The actor’s mien was serious, but only his expressive eyes, lit up in mirth in this second, gave away that he was being playful.

Benedict’s orbs, especially as they reflect the morning sunshine in this bright penthouse floor of the Montage Beverly Hills Hotel, just command attention.

The stock phrase, “Our eyes are windows into our soul,” seemed written with him in mind. Those soulful, intense eyes are also riveting on the screen, big (“The Imitation Game”) or small (“Sherlock”).

Now, in “Doctor Strange,” Benedict and his eyes inhabit the titular character, an ex-surgeon who survives a horrific car accident. When traditional medicine fails him, he goes on a journey of healing to Kathmandu that takes him to the world of the mystic arts. Strange gets more than he was aiming for—he acquires superpowers.

Away from the sets, the British actor is husband to director Sophie Hunter, with whom he has a son, Christopher Carlton (born in 2015).

The couple is expecting a second child.

It was interesting to see in this Marvel movie the power of the mind, instead of the muscles. Although I did get my shirt off. I did work out a bit. No, I am joking (laughs). It’s a novel approach.

Doctor Strange has an amazing knowledge of ’70s songs. What is your own relationship to music? I am no human Shazam. I don’t share that superpower with my character, either. But I love my music. Like everyone, we share the same spectrum, from Beethoven to Britpop, from Beck to Bach, from Radiohead to Rachmaninoff. It’s a wonderfully accessible era of music that we’re living in.

Doctor Strange has an Earth, Wind & Fire song when he started. What is your feel-good song? So many. And weird ones; sometimes songs that shouldn’t make you feel good, because they are alerts to what is wrong in the world, like “Burn the Witch” by Radiohead. Sigur Rós is another band.

How did your wife react when she first saw you in the Doctor Strange costume? She liked it. She approved of the facial hair, too—she was keen on that (laughs).

Do you have a say in the action figure? As an actor, you have a little bit of say in the likeness of your image, because it’s your face they’re working from to extrapolate to something more abstract like those bobble head toys, which I think was the first bit of “merch” (merchandise) that hit the market in this Marvel film.

Lego is Lego, so I was amused to see what they did with that. But to see Tilda Swinton’s head—she was just a hatless Lego head—it was very funny.

It’s a joy to see that kind of lunchbox reality of your character coming to life, as well.

Your Doctor Strange has a relationship with his cloak that is almost like romance. Rather than qualify that with a yes, because the internet would have a field day, it’s a proper relationship. You’re definitely right. I think the cloak is going to become a strong character.

So, is there a piece of clothing in real life … That I have an intimate relationship with (laughs)?

Seizing on that humor, many of your characters are laced with humor. Does that come from you or the script? If it’s indistinguishable, that means I am doing my job. 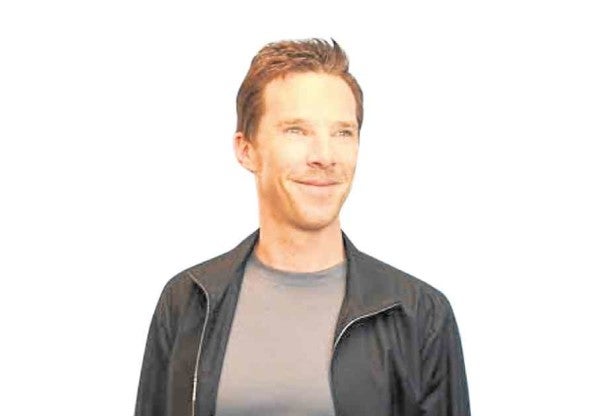 Do you rein in your humor in your performances? All actors, no matter how much you transform, you’re always partly bringing yourself to your work. You are what you are, and you have to start with the canvas you’ve got. That is you.

So, definitely, I think my humor does influence what I do. But so does the humor of other people around me. Thankfully, because I work with people far funnier than I am—I learn all the time.

How did your friendship with Tom Hiddleston start? I met Tom at a party before he first came over here to play Loki. Then, it really was “War Horse” where our friendship began. I am looking forward to working with him again. So yeah, I’m fond of him. He’s a very good guy.

You have Season 4 of “Sherlock” coming up. Does it get easier? We wouldn’t do it if it got easier. The challenges are always beyond our expectations as actors. I’m sure I can speak for Martin (Freeman) in this instance and say that we both read those scripts and have the thrill that hopefully the audience feels too when they first watch them. You’re in for a treat.

Have your feelings toward Sherlock the character changed? They evolve with the script. Wait till you see what strain their (Sherlock and Doctor Watson) relationship is put under in this one. It’s fantastic.

How was your conversation with Queen Elizabeth II, when you were named a commander of the British Empire at the Buckingham Palace? I was a little scared, humble and respectful. Seriously, it was very brief, but a very lovely moment.

Your parents are actors. Did they inspire you? My mom (Wanda Ventham) was a ’70s star in England. She did lots of cult series like “The Lotus Eaters.” My dad (Carlton Cumberbatch) has had an extraordinary career in theater. They have played my parents in “Sherlock” and will be back this season. They remain the people that I want to please the most in my life.

Doctor Strange starts as a scientific man who ends up magical and spiritual. How was your own journey toward that? I had an amazing opportunity when I was 19. I went to India, to West Bengal to teach in a Tibetan Buddhist Monastery. I was a white boy from an English public school.

It was a mind-blowing experience—stopping at Varanasi on the way and seeing the burning ghats in the street alive with death as well as life and everything that collates in those potent parts of Indian culture. And to teach English to Tibetan monks and learn a lot more from them and that culture, that’s more than I could possibly give them as a teacher.

And to revisit those things in this character was a gift and a great memory, as well, not least being in Nepal again, where we went on a break when I was teaching. So, yes, it definitely reopened those things that started in my early years. And that is a great thing.

When you look back at the journey, do you consider yourself lucky or did you have any struggles? Both, definitely. A huge dollop of luck. But just working incredibly hard with every bit of good luck I got to take advantage of that and capitalize on my own opportunities. I have always done that throughout my life.

Read Next
On the other side
EDITORS' PICK
Hard times force even seniors to look for jobs
TNT brings Sarah G and Mimiyuuuh together for epic collab
Over 2M downloads on Google Play, App Store in 4 months for PalawanPay app
House energy committee chair Arroyo bats for cheap electricity
Taal still showing signs of unrest
COVID-19 wave may reach ‘ber’ months
MOST READ
Hard times force even seniors to look for jobs
Tagle one of cardinals eyed to become next pope, says report
Pop music and ‘Grease’ star Olivia Newton-John dead at age 73
Kulturkampf: ‘Katips’ vs ‘Maid in Malacañang’
Don't miss out on the latest news and information.