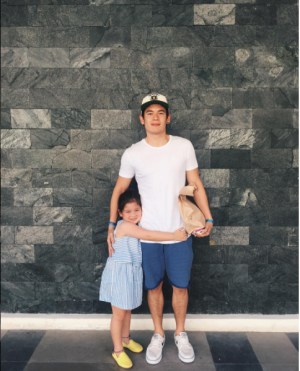 After months of media buzz regarding the paternity issue over Andi Eigenmann’s daughter, model-actor Jake Ejercito has finally admitted he is the biological father of Ellie, who is now 5 years old.

He feels relieved that he can now be open about his real ties to Ellie to whom he dedicated his Best New Male Artist award during the recent Star Awards for Music and Television rites.

“To my number one inspiration, my princess, my Ellie… This is for you”, he said in his speech.

In an interview with Pep.ph, Ejercito said he was delightedly shocked to know that a DNA test done last year showed Ellie is indeed his child.

“Let’s put this way, when I found out, nagulat ako. I was really surprised. But I’m happy and I have no regrets,” he said.

When Eigenmann became pregnant, she claimed that the father was her then boyfriend actor Albie Casiño, who caught many people’s ire for his seemingly nonchalant attitude over his supposed obligation to Eigenmann. The actress even mentioned his name on her 2011 blog post as her baby’s father, whom she called “baby daddy.”

Casiño felt vindicated when a DNA test showed that he is not the father of Ellie. He had been bad-mouthed for years over the issue, and his career had been affected. He got himself deeper into trouble when he was quoted then as saying he never felt the “leap of blood” when he saw Ellie and was convinced she could not have been his child. His camp had suggested a DNA test to determine his accountability over the child, but Andi’s camp refused and a word war soon ensued.

As to the possibility of asking for forgiveness from Casiño, Ejercito said,”The thing (is), personally, I didn’t pinpoint anyone. So I don’t see a need… me, personally, to apologize.”

The big reveal exploded not too long ago when Andi’s half-sister, Max Eigenmann, divulged on a podcast that Ejercito and not Casiño is the father of her niece and that they found this out from the result of a DNA test.