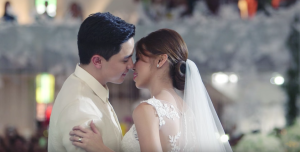 Held at the Christ the King church in Quezon City, the “wedding” with the hashtag #ALDUBthewedding ranked No. 2 worldwide on Twitter.

The entire Eat Bulaga team had made extensive preparations for the big event, from pre-wedding arrangements to actual wedding rites.

Aicelle Santos and Jake Ejercito marched together, and all the finalists of the Eat Bulaga “That’s My Bae: Twerk It Dance Contest” were also part of the entourage.

A wedding would not be dramatic without a good theme song to come with it. No less than diva Kuh Ledema sang “When I Fall in Love,” and while she was singing this, the much-awaited three grandmas—Lola Tidora, Lola Tinidora and Lola Nidora, played by Paolo Ballesteros, Jose Manalo and Wally Bayola, respectively—marched down the aisle.

The wedding seemed so real that people at the church and at the Broadway Centrum (Eat Bulaga studio) almost rolled over when Maine finally marched to the altar escorted by her Daddy Dodong, played by Vic Sotto, who stole public attention with his groovy moves and “cool” hairstyle.

The crowd went out of control as both said their “I do, Father” lines, which elicited “comedic” reflexes from the funny grandmas.

The two also reminisced how their love story started before they said their wedding vows to each other.

But just as the celebration was going, the ceremony was disrupted when the emotional Lola Nidora fainted as the priest signaled Alden to finally “kiss the bride.” But a few seconds later, she was revived and even asked if the couple had already kissed.

When everything settled down, the priest signaled another shot for the official wedding kiss and the crowd just exploded.

What will happen next? Will Kalyeserye Part 2 tackling another chapter of the Aldub love story start soon?  Clarizel Abanilla/rga