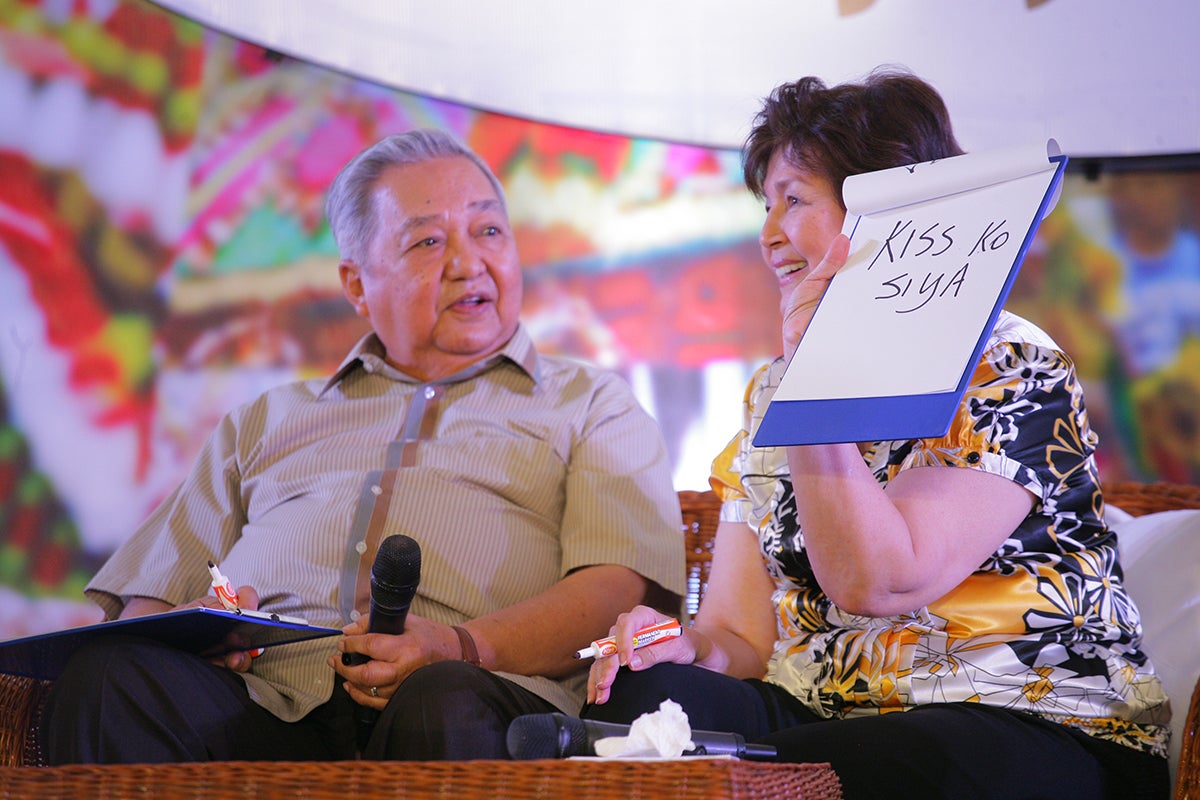 Atty. King Rodrigo and Boots Anson Roa-Rodrigo share a light moment as they are both asked, “What is the first thing your spouse does in the morning?”

Love is universal. Its power is immeasurable. It comes as it pleases and blooms even in the most unexpected places. No one can tell when and in whom it will choose to reside.

Such is the story of veteran actress Boots Anson-Roa (71) and international lawyer Atty. King Rodrigo (77). They never expected to have a second shot at love after their respective spouses passed on. Both were going through the motions of their daily lives and finding another life partner was never on their list of priorities.

But someone up there had other plans.

Boots and King have known each other for a long time. Their families, the Rodrigos and the Ansons, as well as the Cristobals (Boots’ mom’s maiden name) have been friends since they were young. But the almost six-year age gap between the two didn’t allow for anything to prosper other than Boots looking up to King like an older brother.

Fast forward to sometime in 2010. Boots and King have become widow and widower, respectively. Boots lost her husband Pete to stomach cancer in 2007 while King lost his wife Olga two years prior. At the birthday party for King’s mom, their siblings arranged a set up for the two without their knowledge. Unfortunately, King was not ready yet for he still feels so deeply about his wife.

It was in January 2013 that things began to roll, thanks to their siblings who were relentless in trying to hook them up. “On our first date, while we were having dinner, I told the waiter attending to us to serve Boots well because I am marrying her.”

Come November of the same year, the couple announced their engagement much to everyone’s surprise. And on June 14, 2014, on the day of King’s 75th birthday, in front of their families and friends, they exchanged “I dos” in rites officiated by Manila Archbishop Luis Antonio Cathedral Tagle at the Archbishop’s Palace at Villa San Miguel in Mandaluyong.

When the couple announced their plan to wed back in 2013, many were surprised that they would want to walk down the aisle a second time. Some friends even jokingly advised the couple to a MOMOL instead, an urban term and abbreviation of the words make-out-make-out-lang.

But the couple had their reasons and it’s pretty solid.

King likened their decision to a business venture.  “If you are to put up a partnership, everyone should benefit from it. It’s the same with building a corporation; every stock holder should be able to profit and collect dividend. The same goes with love, both parties should benefit.”

He further explains what he meant by profit in love. “Isn’t everybody’s ultimate goal glory and salvation? If you live together without getting married, you will not attain salvation. You will be damned. You will get damnation…”

Boots shares the same belief as King: “Both of us don’t believe in live-in relationships or having physical relations outside marriage.” She continued with a revelation, “We waited until we were married. I couldn’t say that I was saving my virginity since I already have four kids. It was chastity…that when my late husband died, I really kept chaste.”

So what happened on their first night as husband and wife?  Boots shares, albeit jokingly, “It was earthshaking. It was so earthshaking that I hit the headboard.”

Needless to say the couple were fearless to give married life another try.

[Getting married a second time to her is more exciting. The first question in mind is, can we still do it? It’s full of suspense. When we got married during our 20s, we know and we are sure of what will happen. This time around, there’s a little doubt,” teases King. He further narrates, “When you’re younger, the attraction to women is physical, as you get older it gets emotional, and then it gets intellectual. But sometimes, it still gets physical.”]

Like any couple, regardless of their age and the length of time of their relationship, arguments, discussions and disagreements are all but normal. Boots and King are no exemption.

Take for example the subject of money, albeit the good kind. Since Boots is financially independent, she tells King not to use his money on her kids, her extended family, or to charities that she is supporting. But chivalry is strong in King, and he simply wouldn’t allow it.

Sometimes, it can be about King insisting to drive when they have two drivers at their beck and call. Or, it can be about buying comforters and bed sheets, an aspect where King can sometimes get impulsive with.

[Everytime we go to SNR, he stops at the bedding section. And then I would whisper to him, ‘We no longer have space for that.’ He would reply, ‘Go on and shop in that area, don’t mind me here.’ When we get home, we’d surely have another comforter. I think the only color we haven’t bought is Fuschia,” she shares.]

On a more serious note, Boots is grateful that everything seems to be cut out almost perfectly. “In the vital issues, we have no problems. When King and I talk before sleep, our conversation is always about thanking God and how good He has been to us.”

The couple’s secret is revealed by King. “The rule is to not go to sleep fighting because if you do it will fester. You have to talk about it and mend it before going to sleep.”

It’s been more than two years since Boots and King tied the knot but the love and respect, even the kilig for each other, is very much seen and felt in them. All the elderly present at the launch of AgeWell Club during the first Philippine Expo on Aging Well held recently at Metrowalk, Ortigas can attest to that.

AgeWell Club of United Laboratories Inc. (UNILAB) was conceptualized to support and encourage seniors to live a healthy, happy, and active life. It is a collaboration of Unilab’s trusted brands such as Enervon Prime, Skelan, and Neurogen-E.  The couple were invited to share their journey to aging as well as their remarkable love story.

King advises other seniors not to go looking for love for they’re bound to make a mistake. “If you go looking for it and it’s been a while since the last, when you meet someone regardless if you are sure or not, you’d make yourself believe that it is the one that you’ve been looking for. So don’t go looking for it but, don’t turn away when it finally comes.”

Boots recalls of his life before King and the difference he’s made when he came.  “Before King I was happy with I have. When he came and offered marriage, I realized that even at this age, you can be happier when you are not centred on yourself. [You can be happier] when there’s somebody else you can devote your life to.”

As for aging, she considers herself lucky to be spending it with King regardless of the common illnesses people getting old are faced with. For her, it far outweighs the life experience, the wisdom, patience, and tolerance that come with age.

She also credits humor as a big factor to growing old happily. “When we are able to laugh at our mistakes, at our shortcomings, when we forget why we were in the toilet in the first place, or when you open the fridge and see the key that you’ve been looking for all this time… what is the antidote to that? It’s your sense of humor, learning to laugh at ourselves, learning not to take ourselves too seriously. We can take our life, our relationships seriously, but not ourselves, at least not too much.”

[In a day, Boots and I would text about 10 times and in all that we never forget to say “I love you.” Even on the telephone, we always end it that way. But it’s not enough to just say the words, you have to show it. There is nothing chivalrous in opening the door for your wife or serving her at dinner time. Doesn’t that feel good for her and for you? Remember, happy wife, happy life.”] ADVT.