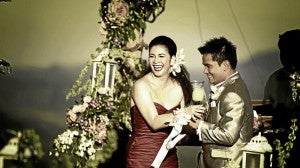 After a series of tragedies, local showtown gets a dose of good news, as the Songbird gets visited by the stork.

Husband Ogie Alcasid said his son, named Nathaniel James, was born 7:47 p.m. “He’s 4.4 pounds,” he told Inquirer Entertainment via SMS. “He’s a light baby because he wasn’t due to come out yet.”

The couple expected the delivery to take place on Nov. 22.

“However, our doctor, Lilibeth Genuino, decided to do a CS (cesarean section) on Tuesday night because Regine’s amniotic fluid was low and sugar was high due to gestational diabetes,” he said.

Throughout her pregnancy, Velasquez, 41, had to cope with gestational diabetes.

A few weeks before her delivery, Alcasid told the Inquirer that his wife was doing well and was able to control her weight with a balanced diet. “She heeded the doctor’s advice. She had no complaints.”

He described the new baby as a “blessing. We’re very thankful.”

Alcasid told the Inquirer Thursday via SMS: “The baby is now really doing well. He’s now latching on to mom for breast-feeding… so he can gain weight.”

Alcasid wrote on Facebook, in response to the good wishes: “Thank you everyone! Mommy and Baby are fine! Praise God!”

In an earlier interview with the Inquirer, Alcasid said they didn’t build a separate nursery in their home for baby Nathaniel James.

“He will sleep in our room in the meantime. But eventually we will convert the guest room into his bedroom.”

He reported that friends have been throwing a series of baby showers for his wife. “We’re almost complete with baby stuff.”

Alcasid has two older daughters, Leila and Sarah, from his first marriage to Australian beauty queen Michelle van Eimeren. But Nathaniel James is his first son and Velasquez’s first child.

He said that his daughters, who are based in Australia with their mother, are aware of the new addition to their family. (Van Eimeren is already married to compatriot Mark Murrow.)

“I’m very open to my daughters about what happens to us here,” he said. “I update them every week. We talk on Skype. We chat on Facebook. My daughters are excited about having a baby brother.”

In a previous interview, Velasquez said that being an aunt to her 12 nephews and nieces has prepared her well for motherhood.

Alcasid noted that “being a father to a baby boy is exciting.”

“Children are on loan from us from God,” he said. “They are our responsibility. I take parenting seriously. I plan to take a few days off from work to help my wife.”

He plans to be a hands-on father, he said, and will share diaper duty with his wife.

“I have no problem changing diapers,” he said. “But they say it’s easier to change the diapers of baby boys compared to girls.”

He conceded that being a father to a son is “different” from his previous experience with his daughters.

“I will be able to share with my son the things I experienced growing up… playing street games under the sun and coming home with dirty and tattered school uniform,” he said.

Singer-actress Sharon Cuneta, a friend of the couple’s told the Inquirer: “I’m so happy for them. Baby Nathaniel James is one of the most loved babies on the planet. So many people prayed for this blessing for them—myself included. Ogie and Regine are going to make great parents.”

Singer Rachelle Ann Go, the couple’s costar on the GMA 7 variety show “Party Pilipinas,” told the Inquirer: “I won’t wish anymore that  their baby will grow up into a fine singer because I’m sure he’ll be… because of his parents.”

Singer Erik Santos, who costars with Go in the stage musical “The Little Mermaid,” said: “Ate Reg and Kuya Ogie are special to me. I wish to see baby Nathaniel James soon.”

Singer-actress Karylle agreed: “The Alcasids are among the sweetest people you’ll meet in the business. I’m glad their family is finally complete… apart from their first baby, Shih Tzu George.”