Bringing back mem’ries of ‘Baby Ama’ 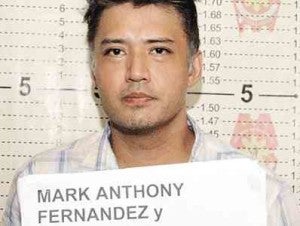 My godbrother Mark Anthony Fernandez is such a tortured soul. He’s a little boy trapped in a man’s body.

The last time I saw him was at the French Film Festival in  June. He was part of the cast of Brillante Ma. Mendoza’s “Ma’ Rosa,” which was featured in the fest. How ironic that Mark portrayed a cop who extorted money from junkies. Now that he had been nabbed for possession of marijuana, I’m sure Mark wishes that it’s just another shooting day. How surreal is that?

Mark’s photos behind bars have an uncanny resemblance to his late dad, Rudy Fernandez’s  “Baby Ama” movie posters (minus the skinhead look). Rehabilitation instead of incarceration would help Mark get his act together. Everybody deserves a second, third, nth chance as long as one is  willing to change.

But at the rate things are going, it seems like Mark’s fate is sealed. I just hope they won’t use him as an example to warn celebrity offenders who are suspected of being hooked on drugs more potent than marijuana.

Let us not condone their behavior, but neither should we condemn them. Shun the sin, not the sinner.

“Mark had some problems that bothered him, but I can’t speak for him. My message to the public: Please don’t condemn him. He’s a good actor, but not a good role model. He’s a habitual user of marijuana [for medicinal use], but not a pusher. Whatever he’s got is for personal consumption. Hope the truth will come out. Mark is a confused kid at heart. Let’s pray for him.”

GMA 7’s seasoned news anchor, Jiggy Manicad, has many tales that only he can tell. After two decades of being where the action is, Jiggy shares his stories in his book, “On the Edge.”

The title says it all: Life is too short to stay in our comfort zone. We must take risks and venture into the danger zone.

Here’s my chat with Jiggy:

What’s your advice to  aspiring journalists?

Journalism is not about fame and fortune. It is about the stories that we do, their impact on the public, and the accuracy, fairness and truthfulness that go with them. Leave no stone unturned; Inday Badiday’s “See-True” … inspired me to scoop competition and come up with your not-so-usual kind of stories.

In a nutshell, what does your book convey?

Pain in time of wars and tragedies, triumph as we’ve seen in the coverage of GMA 7’s Mt. Everest expedition, and inspiration when I was able to get close to Pope Francis during his visit in Tacloban.

I would also like to show that despite the demands of our job, one can still have a balanced family life. And that is what I am most proud of.

Nine of the best high school dance crews in the metro are set to battle it out in the first “Myx Moves Street Dance Competition,” on Oct. 23 at SM City North Edsa SkyDome. Watch Part Two of Myx Moves semifinals on Oct. 15, 5 p.m., on SkyCable channel 23.