Program launched by Film Academy of the Philippines as an answer to the high cost of studying filmmaking
By: Marinel R. Cruz - Reporter
Philippine Daily Inquirer / 07:58 PM November 10, 2011 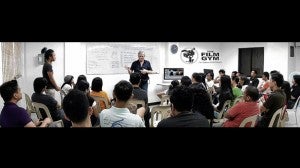 The Film Academy of the Philippines is promoting what it calls the “advocacinema” through The Film Gym program, which teaches the basics of filmmaking at a minimal cost.

FAP director-general Leo Martinez, also an actor and director, said the program was designed to help teachers, students and non-government organizations promote their advocacies through film.

“I thought of this program as an answer to the high cost of studying filmmaking,” Martinez told Inquirer . “One semester at Big Foot Entertainment (studios) in Cebu reportedly costs P100,000. There are courses offered in UP and Ateneo de Manila, but they’re still pricey.”

The Film Gym, opened in January, is equipped with video cameras, lighting units and editing machines and can accommodate over 30 students. It is located at 45 Malingap cor. Mahiyain Sts., Teacher’s Village, Quezon City.

Surf Reyes, also a founding director of the Mowelfund Film Institute, is program director and trainor.

“The first three meetings are lectures,” Martinez explained. “The students will be taught to tell a story using visual language. Before their eighth session is done, they should know how to make a film.” Sessions will be held weekdays, to accommodate professionals and students.

The FAP subsidizes 75 percent of the tuition for the regular VL101/102 workshops, so a participant shells out only P6,000.

According to the FAP website, film students may “continue learning through a progressive training system.” This includes “specialized workshops” on scriptwriting, cinematography and lighting, digital editing, etc.

Martinez said the FAP has received funding from Sen. Kiko Pangilinan, which allowed them to offer the scholarship. Over 115 applied for the grant, mostly teachers from Zambales, Tarlac, Bicol, Nueva Vizcaya, Pangasinan, Davao, Cagayan de Oro and Cotabato.

“The response to our call for interviews was overwhelming, but we could take only 30 students,” Martinez said. “An applicant from Basilan got a sponsor for his trip to Manila for the interview. One from Nueva Vizcaya traveled nine hours by bus to get here.”

Since The Film Gym started, two regular VL101/102 workshops and two AdvocaCinema workshops have been conducted.

Martinez said the teachers in the program want to improve their teaching methods; those from the NGOs seek to advance their causes (antipoverty, women’s rights, etc.). “These are the people we want to help,” he said. Log on to http://thefilmgym.webeden.co.uk.