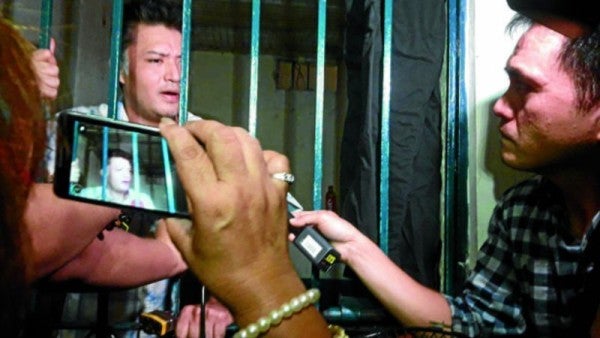 BEHIND BARS Actor Mark Anthony Fernandez says the kilo of marijuana found in his possession by policemen was to be used as medicine to prevent cancer. CONTRIBUTED PHOTO

ANGELES CITY—A judge here dismissed on Thursday a case involving possession of drug paraphernalia filed against actor Mark Anthony Fernandez, two days after the actor was arrested for alleged possession of a kilogram of dried marijuana in this city.

Judge Eda Era of the Regional Trial Court Branch 60 dismissed the claim that a grinder, supposedly an equipment for drug processing, was found in Fernandez’s car when he was arrested.

The grinder was not among the items listed in the inventory made by the police, the INQUIRER learned.

But Fernandez pleaded not guilty to violating Section 5 of the Dangerous Drugs Act of 2002 (sale, trading, administration, dispensation, delivery, distribution and transportation of dangerous drugs and/or controlled precursors and essential chemicals) when he was arraigned before Era on Thursday.

If convicted, Fernandez faces life imprisonment and a fine of up to P10 million. The actor  claimed that policemen “planted” the dried marijuana in his car.

READ: Mark Anthony Fernandez may be jailed for life

Fernandez, 37, has a pending case for simple resistance and disobedience at the Municipal Trial Court Branch under Judge Ireneo Pangilinan./rga