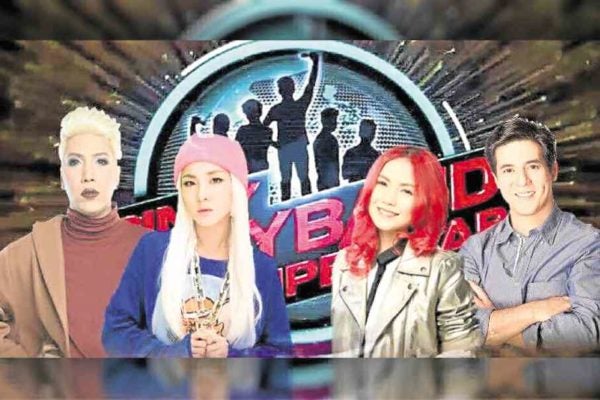 The first telecast of “Pinoy Boyband Superstar” last Sept. 10 introduced viewers to a decidedly eager-beaver bunch of young lookers and would-be musical performers. Why were they behaving so eagerly and beaverly?

It turned out that each contender first had to delight the studio audience made up of giggling, gaggling girls before the new tilt’s jurors could even get to listen to his vocal performance.

They have to score a cumulative “passing” grade of at least 75 percent—no wonder they were working so hard to ingratiate themselves with all those shrieking and screaming banshees!

The buena mano telecast made sure that it started off with a bet who had an especially striking combination of looks and singing ability.

The next young hopeful, however, turned out to be too eager to please, a rather “over” and even caricaturish performer who failed to get a passing mark from the audience, whose gaga members found him too hyper even for its addled taste.

Thus properly warned, the other hopefuls in that episode made sure they delighted the audience without turning it off.

After a while, we noted that despite some occasional tics and quirks, the newbies who got to perform for the tilt’s judges tended to come off like peas in a pod, too “generically” attractive and promising to individually stand out.

Is this supposed to be par for the boy band course? If we take The Beatles as a “pop historical” reference and standard, the answer would be negative.

The fave group’s  members were “iconically” different from one another—which is one of the key reasons why The Beatles have clicked with generations of pop music fans.

Granted, the boys of Menudo opted for a more homogenized “cute teen boy next door” projection—but, it’s instructive to note that the group is no longer around.

As for the current hit boy band, One Direction, it’s reminiscent of The Beatles’ preference for individuality over generic cuteness.

So, we hope that ABS-CBN’s new talent tilt will go for exciting variety and contrast in its choice of aspirants, instead of the “peas-in-a-pod” similarity or even sameness that it’s led off with.

True, a subsequent telecast featured a pair of singing and dancing siblings who were both a departure from the tilt’s desultorily “bland pogi” norm.

But could both of them get into the new boy band that the tilt intends to form? Wouldn’t they be better off being built up as a duo?

Basically, what we’re antsily waiting for the tilt to do is to come up with a contender who looks good and is also a terrific and charismatic singer.

Thus far, we’ve mostly gotten lookers who can “sort of” sing. Where are the really excellent young singers?

After auditioning many hundreds of new singers for different productions, we know for a fact that those “total performer” combinations do exist. How come they aren’t being enticed to audition for “Pinoy Boyband Superstar”?

Yes, it’s a search for members of a new teen singing group—but, as 1D’s success has shown, a boy band made up of individually interesting and superior soloists is—the way to go!