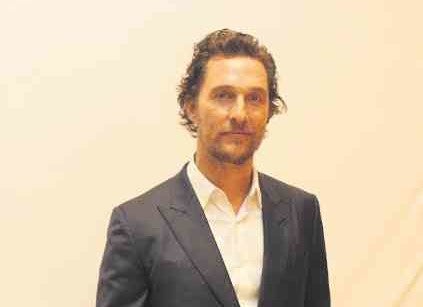 LOS ANGELES—Add “professor” to Matthew McConaughey’s titles, which include Oscar and Golden Globe best actor winner. Matthew is teaching a class, titled “Advanced Producing: Script to Screen” at his alma mater, University of Texas at Austin, this fall.

It’s the actor’s second time to teach at the school where he earned a Bachelor of Arts degree in radio, television and film in 1993. He taught a similar course in 2016 but that stint wasn’t widely reported.

McConaughey walked into a hotel meeting room carrying a glass with what looked like red wine. With his long, curly hair and suit, Matthew cut a dashing figure.

The topic quickly became about his favorite drinks. “If I’m drinking bourbon, I like Wild Turkey,” said the famous Texan in his Southern drawl, which, combined with his soothing voice, has a hypnotic effect. “I also like tequila occasionally and a nice red wine.”

He clarified, “This is cranberry juice, by the way.  That’s how much I like red wine, though.”

Matthew heads the voice cast of two wonderful animated films this year, Garth Jennings’ “Sing” (with Scarlett Johansson and Reese Witherspoon) and “Kubo and the Two Strings” (with Charlize Theron and Ralph Fiennes).

Surprisingly, it’s the first time he lends his voice to animated movies. He explained that having three kids with his wife, Camila Alves, inspired him to make films that they can watch.

You are now teaching a class at the University of Texas at Austin.

Yes. It’s a curriculum that I created because after being in this business for 20-something years, I noticed it’s the class that I wish I would have been offered when I was there in film school. It’s called “Script to Screen.” What I’ve noticed over the years is how vastly different the final film is from the original first script you read.

There are additions, improvisations, cuts and edits. I wanted to help the students put some science to the magic of that adventure that every script takes from its inception to when it’s finally on film, usually like a year-and-a-half to two years later.

Do you feel that you’ve hit rock bottom in the past? And how did you cope?

I can’t say that I’ve hit rock bottom. I’ve had events in my life where I felt like it was rock bottom—the passing of my father, some other close friends.

Instinctively, I’m pretty quick at going, okay, what is the way out of this? I try not to do it too fast because if you are too resilient too quickly, you never learn the lesson that maybe you should have learned. One of the great things that my mom raised us on is, if we were upset about something, she’d say like, “Look, you sound like the boy griping about having no shoes.  I’m going to introduce you to the boy with no feet. ”

What did you learn from your two older brothers?

My middle brother Pat is still an inspiration to me. When I was 10, he was 17.

He would take me places with him. He would get home at his midnight curfew after being out, come and wake me up and bring me out in my pajamas. We’d sit in the driveway in his car and he’d play his new tunes. We’d listen to them over and over ’til 2 a.m.

He taught me how to golf. When I was in 5th grade, the 8th graders bullied me on the bus. The next day, he pulled the bus driver over and got on the bus and handled it. I had carte blanche from then on. I got bullied no more.

He’s a guy who reminds me to go forward, heart first instead of head first. Because he’s a real artist. It’s important to him to keep our family together.

Was he the one who inspired you and Camila to start the just keep livin Foundation?

No, just keep livin (Foundation) came from my father’s passing away. I’m trying to understand how to maintain my relationship with my dad after he was physically no longer here. So it’s about keeping the things that he taught me in my life, how to keep those alive daily.

You have never done voice acting in animation films but this year, you have not one but two. Has becoming a father had anything to do with that?

I’ve learned there’s also a really nice outcome. Now that my kids have seen these two movies, I have a little more clout in the household now.  They think dad’s a little bit cooler now that they’ve heard me in animated films.

Reports of your obsession with brushing your teeth are not true?

Two times a day but maybe I brush for a long time twice a day.

What is your biggest weakness?

I am stubborn but I’d say that’s an “upfall” and not a downfall. A lot of times, the weakness is also the strength in an odd way. I can be selfish. I also think that it is quite healthy to be selfish at times. I’m vain, too but I can also look at vanity where it’s gotten me with more healthy outcomes than if I wouldn’t have been vain.

What keeps you young?

I’d say what keeps me young are my outlook, brushing my teeth and drinking a lot of water (laughs).