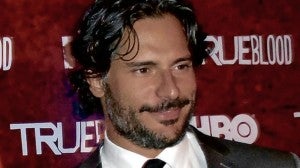 Italian-American actor Joe Manganiello’s first day in Hong Kong was, in a word, hectic. Shortly after arriving at the Mandarin Oriental Hotel and having breakfast, he gamely conversed with Asian entertainment writers for HBO Asia’s “True Blood” press junket. He was to appear for interviews in other venues as well.

Manganiello (mang-gun-yellow), 34, admitted he was a comic book “addict” as a kid in Pittsburgh. He said he shoplifted “huge stacks” of Spider-Man comics, which he returned to the owner many years later. Interestingly, he landed the role of teen bully Flash Thompson in the 2002 “Spider-Man” film.

The actor then played recurring TV characters in “How I Met Your Mother” and “One Tree Hill,” but he is best known for his noble werewolf character Alcide in “True Blood.” Alcide returns in Season 4 (Thursdays, 10 p.m.), set a year after the events of Season 3.

“I think this is the best cast in television or film ever assembled,” he said. “I put it up against any movie or TV show that I’ve ever seen. Most of the actors are seasoned theater veterans from around the world. They’re all just iconic. And the characters—you don’t see an Alcide, a Pam, a Lafayette on any other show. It’s really just amazing.”

Towering at 6’5”, Manganiello used to borrow the school camera to shoot kung fu-gangster movies with friends. He acknowledged the show’s “very human” godlike beings and noticed a similarity between creator Alan Ball and a famous playwright. “I came from a classical theater background,” he said. “[The show] is very Tennessee Williams. In the deep South, very hot, very passionate. Everyone wants to kill or sleep with each other. Alan to me feels a lot like Tennessee Williams. I really do think that if Williams were around today, he’d be Alan Ball, writing about vampires and werewolves!”

He revealed that growing up was tough because he was a sensitive and artistic kid, but he was “born into a very big body,” so he was encouraged to become athletic. He expounded on some real-life alpha male traits and other qualities similar to his alpha wolf character.

“I always played sports growing up. I was the captain of the football team, basketball team, volleyball team. I think that was a role I was always thrust into. As far as dating goes, I believe it’s a guy’s job to protect his girlfriend. You open car doors; you pick them up and pay for the date. I’m a traditional guy in a lot of ways.”

Alcide is also very protective of Sookie Stackhouse, played by Anna Paquin. “Sookie is a catalyst that forces him out of the house and gets him in trouble,” Manganiello said. “There’s a hero that emerges when he does that, but there’s also this monster. That’s a very fascinating character for a man to play, someone who’s so strong, vicious and animalistic, but also vulnerable and sensitive. A character like that, that’s a home run!”

The potential Alcide-Sookie pairing elicited favorable fan reaction, partly resulting in Manganiello’s continued appearance. “I think he’s the perfect guy for Sookie,” he enthused. “Like many of the fans, I want to see them hook up. Totally! We’ll have puppies! They only signed me for six episodes [initially]. On that show, if they don’t like you, they’ll kill you! When they invited me back, I was really excited and just so happy that people were responding to my character.”

Manganiello also described his scenes with Sam Trammell and Marshall Allman, who play shape-shifting brothers, as “really fun.” He added, “I think Sam and Alcide make a great duo. They could have a show where they solve crimes. Vigilantes! I like the dynamic a lot. There’s really heavy stuff going on. And it was great to work with Marshall. He’s such a great actor, and the stuff we got to do was gut-wrenching. In Season 4, there is a lot of fighting between shape-shifters and werewolves, so a lot of sides get picked. In the end, I really felt a lot for these characters.”

As for taking his clothes off, “It feels a bit like being a competitive swimmer: Before you get in the water, it’s cold, you’re wearing something very little. But once they yell ‘action,’ I’m a werewolf. I’m not embarrassed. There’s a sound guy with a microphone crouched right at about my butt level. There’s my wolf (Thunder) sitting there. And it’s broad daylight, too!”

Counting actors Robert De Niro and Gary Oldman and filmmakers Tim Burton and David Fincher among his idols, Manganiello is thankful for the opportunities to meet and work with people he respects and admires. He will be seen in coming movies “What to Expect When You’re Expecting” (with Cameron Diaz and Jennifer Lopez) and “Magic Mike” (directed by Steven Soderbergh).

“I’m so excited,” he gushed. “I feel like I’m just at the starting line. The amazing thing about ‘True Blood’ is that the entire industry in Hollywood watches it. So I’m constantly running into producers and directors. I just met Darren Aronofsky. I’m a huge fan. He came up to me to introduce himself. I worked with Chris Rock; I quote him on a daily basis. I was fighting my way through this crowd to go say hello and tell him how big a fan I was. Before I could say anything, Chris grabbed my hand and told me he loves the show. And I became friends with Paul Reubens! Stuff like that is just incredible!”