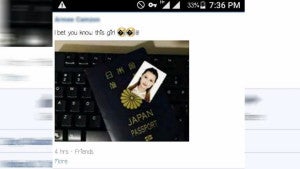 Actress Maria Ozawa turned to Facebook to express her outrage over a Bureau of Immigration (BI) worker who allegedly posted her passport, photo and confidential details on the latter’s account.

A fuming Ozawa said she was extremely disappointed after a friend texted and warned her that private details about her had been posted on Facebook. She ignored this at first but fully understood the warning when she saw for herself her passport and [alien] ID photo posted on someone’s private account with the caption “I bet you know this girl,” followed by other private details including her whereabouts in the comments section.

As confirmed by a photo attached to her post, the person who posted her private details was identified as a female “Immigration worker” who got hold of Ozawa’s confidential details.

Ozawa opined that the BI, as a crucial government agency, is supposed to uphold high standards in ensuring the secrecy and security of confidential information of foreigners in the country. But it appeared that a member of the bureau got too “excited” upon getting hold of Ozawa’s private details that she posted her [Ozawa’s] passport and photo on her private account and shared details about her that instantaneously drew people’s attention since she is a famous personality. 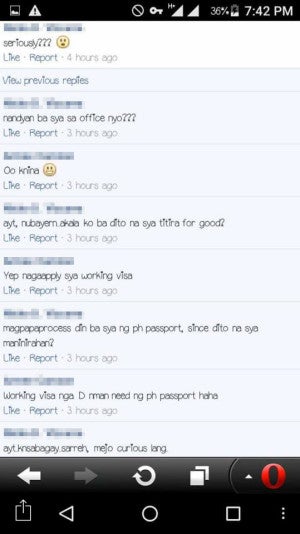 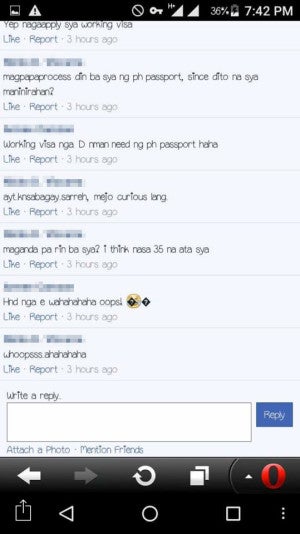 Ozawa’s disappointment was made worse as she said said she had come to love the Philippines, but that because of the incident, she was having second thoughts about her plans to stay in the country for good.

The former adult movie actress is not quite sure if she would file a legal complaint about the incident. However, her managers are already informed about the situation and she is leaving the matter on their hands.

Meanwhile, the girl who posted her details on social media is now the subject of ire by netizens.

“I don’t know if I should be mad or sad…or even post this but since it’s something really wrong I would like to share it with you guys. One of my friends texted me today with this picture saying my privacy might be going viral.At first I didn’t know what she was talking about but when I saw the picture of my ID/alien card posted saying ‘I bet you know this girl’ made me so mad and sad at the same time. This is very wrong. Immigration is a place where people TRUST and give their private accounts,details and look what she’s done to my privacy…Posting it on her social media. I LOVE this country and I’m doing my VERY best to stay here for good but how can I stay here for good when people like this really exist? How I’m I supposed to trust people? If this was just someone I knew or some random people posting it for fun I can understand.They are just being bastos. But people who actually work in the immigration doing stuff like this? I just cannot believe it.The grab/Uber incident was bad as it is and then this happens…Should I file a complaint? My managers already know about this sad incident so I will leave it up to them but it’s just too sad and depressing I had to share it with you guys.”