LOS ANGELES  – Michael Jackson’s doctor Conrad Murray was found guilty Monday over the King of Pop’s 2009 death, triggering an explosion of joy from his family and fans. 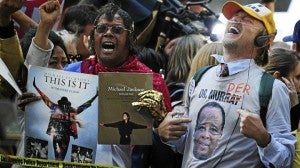 Supporters of Michael Jackson holding placards outside the courthouse react to the announcement of the verdict of his doctor's trial in Los Angeles on November 7, 2011 in southern California. Michael Jackson's doctor Conrad Murray was found guilty of involuntary manslaughter over the King of Pop's 2009 death, the court clerk said. There was a brief cry in the courtroom, and cheers outside, but Murray himself gave no reaction when the long-awaited verdict was announced after a six-week trial in Los Angeles. FREDERIC J. BROWN/AFP PHOTO

Crowds of supporters outside erupted as the verdict was announced, while minutes later judge Michael Pastor ordered the 58-year-old medic handcuffed and remanded in custody, pending sentencing later this month.

Jackson’s mother Katherine cried and was hugged by one of his brothers, after jury convicted Murray of involuntary manslaughter for giving him an overdose of the anesthetic propofol.

Murray admitted to giving Jackson a small amount of propofol to help him sleep, but not the massive amount of the drug — which is normally only used in a hospital setting, as an anesthetic — found in his body

“Justice was served,” his brother Jermaine said as he and the rest of the family braved huge crowds to leave the building, while sister Rebbie added: “Nothing will bring him back, but I’m happy (Murray) was found guilty.”

“VICTORY!!!!!!” tweeted La Toya, adding outside court: “He was in that courtroom and that’s why victory was served.”

A short time later she tweeted: “Michael I love you and I will continue to fight until ALL are brought to justice!” — an apparent reference to her theory that Jackson was killed as part of a conspiracy.

A grim-faced Murray himself gave no reaction when the verdict was announced and judge Pastor ordered him remanded in custody pending a sentencing hearing on November 29.

Murray faces up to four years in jail and could be banned from practicing medicine after his conviction in connection with Jackson’s death from an overdose of propofol on June 25, 2009.

His defense lawyer Ed Chernoff made no comment about whether Murray will appeal against the conviction.

LA District Attorney Steve Cooley praised his deputy David Walgren, who was widely praised for his masterful prosecution of the case, against a defense which some observers thought ended the trial in tatters.

“They put together a compelling case based upon competent evidence. Their presentation of the evidence in the court was superb,” Cooley said.

Walgren himself added: “Our sympathies go out to the Jackson family at this time, for the loss that they have suffered. Not a pop icon but a son and a brother. That’s most important to keep in mind today,” he told reporters.

Outside, the verdict was greeted by joy and relief. “Joy, justice, relief, finally, that’s it,” Jackson fan Terry Wilson told AFP amid celebratory scenes outside the downtown building where the trial started September 27.

In his closing arguments last week, Walgren said Murray caused the star’s death through negligence and greed, depriving Jackson’s children of their father and the world of a “genius.”

The defense, meanwhile, argued that Jackson was a desperate drug addict who caused his own death by taking more medicines while Murray was out of the room at the star’s rented mansion in Los Angeles.

Chernoff claimed that Murray was “a little fish in a big dirty pond,” alleging that key witnesses conspired to agree on a story after Jackson died.

Shortly before the verdict announcement, Jackson’s former dermatologist broke his silence to deny the singer was a drug addict, or that he had given him massive doses of painkillers in the months before his death.

“Michael was not a drug addict. .. Michael Jackson did not have a problem with painkillers,” said Dr Arnold Klein, whose office Jackson visited several times a week in the months before his death.

Specifically he denied having given Jackson large doses of the painkiller Demerol — 900 mg over three days in one case — during May 2009, as suggested by records shown in evidence at the trial.

Klein said he was away in Paris for most of the month of May, and other doctors worked from his office.

“I would never give a person those doses attributed to me,” he told the HLN television channel. “Those doses they said in trial are not my doses,” he added.

Read Next
Lindsay Lohan spends five hours, not 30 days, in jail
EDITORS' PICK
Notice of 2020 regular meeting of stockholders June 18, 2020
SM prepares for ‘safe malling’
Leveling up your ‘lutong bahay’ with the kitchen companion you never knew you needed
NBI, Immigration to join hunt for ‘underground’ medical clinics
2 Chinese nationals arrested in raid on another unlicensed COVID-19 hospital in Pampanga
P2.2 trillion in losses: Cost of COVID-19 impact on PH economy
MOST READ
Revillame tells Roque: ABS-CBN is in my heart despite being in rival network
NCR is ready for GCQ — Palace
LOOK: Robredo, Vico Sotto, check Community Mart ops in Pasig
Año: Quarantine passes not needed in GCQ, movement restricted to essential travel
Don't miss out on the latest news and information.