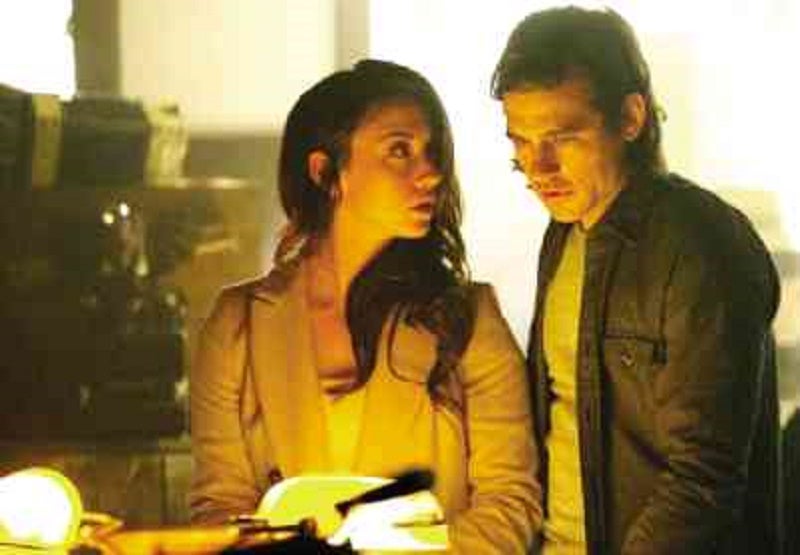 STELLA Maeve and Jason Ralph in “The Magicians”

An episode into the moody “The Magicians,” it’s easy for viewers to form the impression that the fantasy show, based on a series of books, seems like a re-imagination of “Harry Potter” and “The Chronicles of Narnia,” but swirling into one twinkly kink-fest for grownups.

More than that, however, the 13-episode first season of the show (ETC, Saturdays, 8 p.m.)—about the students and rejects of a secret college for aspiring magicians in New York—has dark, even upsetting corners that it audaciously explores.

Brakebills, the covert school, includes in its new batch of students the jaded Quentin Coldwater (Jason Ralph), who finds new meaning after discovering his magical abilities.

His childhood friend, Julia Wicker (Stella Maeve), is also invited to try out, but fails the entrance test. She’s also magically gifted, and having tasted true power, she hopes to fulfill her own potential. Julia seeks training elsewhere, and becomes obsessed with magic.

Quentin and his new classmates—who have different areas of mystic expertise—discover other realms that exist beyond their own. One of them is the fantasy world from his favorite book, which has its own secrets and deadly menaces.

The parallel learning paths of Quentin and Julia unveil a sprawling world, with its own sets of rules and rivalries.

Quentin finds romance in the school—and, to his new girlfriend’s dismay, realizes his fluidity, although he barely recalls his drunken bisexual tryst.

Julia, meanwhile, meets with possible mentors from shady and unsanctioned factions, and goes through something resembling addiction, giving someone sexual favors at one point in exchange for more magical info.

Those two protagonists’ paths converge at certain times. It’s intriguing to see both Quentin and Julia fail and grow into their new roles, while learning from separate sources.

The show, populated by mostly good-looking but reckless characters, has its disturbing and violent villains. Those arcs involve abuse of some form, inflicted on, or by, those antagonists—making them more unpredictable sources of conflict.

There are quests in the show that take time, devoted to fending off or fighting those foes. It’s a little early to tell if “The Magicians” becomes a stretched-out, never-ending magical struggle, but it may give more depictions of change and growth apart from the martial education of a weekly war zone.