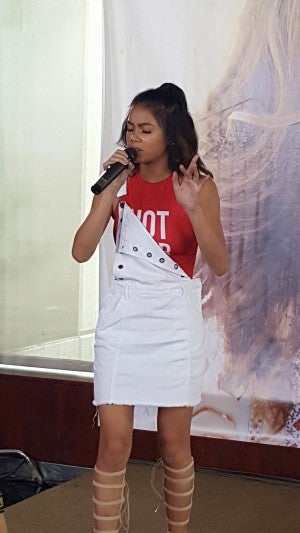 At 14, “Pinoy Big Brother 737” Teen 2nd Big Placer Ylona Garcia may well be on her way to stardom with the launch of her very first album, “My Name Is Ylona Garcia.”

At a press conference last Monday for the official release of her first album, Ylona stunned the press people with her powerful performance of her songs “My Name Is Ylona Garcia,” “Don’t Say Goodbye” and “Dahan Dahan Dahan Lang.”

Ylona was said to be very hands-on in the development of her album that even at a young age, she was able to contribute a few songs in it, mainly “My Name Is Ylona Garcia”, “Don’t Say Goodbye”, “Win the Fight” and “Each Day.”

“The first song I’ve ever written for the album was ‘Don’t Say Goodbye.’ I wrote that song for a PBB task. We had like one week to write it. I just remember at that time I was really sad ‘coz one of my friends was evicted and I just wrote it. I don’t really have a process, I just write whatever pops into my head,” she said.

However, among all the songs in her album, her favorite would have to be her upbeat pop single “Not Yo Bae.”

“I love singing it. I feel so empowered when I sing it, you feel so dominant it makes you feel like you’re the leader here ‘coz I’m not yo bae. I’m not gonna be like always be my baby or my everything, I’m just not yo bae,” she added.

With such singing prowess, even at a young age, she is already being likened to some foreign songstresses. Some say she’s the Philippines’ Ariana Grande.

Being young, she does have a lot of people she looks up to and hopefully wants to work with.