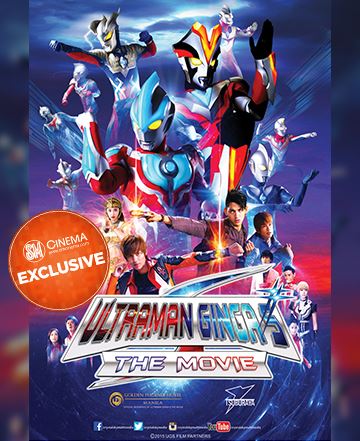 Children and longtime fans of the Ultraman series are in for a treat as “Ultraman Ginga S The Movie” is offered for exclusive screening at SM malls from September 10 to 11.

The film is based on the 2014 television show Ultraman Ginga S, a 16-episode series that follows the story Hikaru as he joins a defense force and battles an alien menace and his minions.

The movie, directed by Koichi Sakamoto, starts with Hikaru being reunited with the Ultra Party Guardians. The team faces an evil space warrior named Etelgar and his accomplice Alena, who is later revealed to be an alien princess manipulated into trapping Ultraman heroes.

The movie stays true to the Ultraman tradition of battling kaiju (monsters) to protect mankind and having fight scenes set in elaborate city dioramas.

Ultraman first started as a Japanese television series in 1966 and was later introduced in countries like the Philippines. Because of the success of the franchise, it was awarded in 2001 with the Guinness Book of World Records for the most number of television spin offs.

SM Cinema is offering the movie as part of its Family Movie Day promo that encourages Filipino families to develop a weekend movie habit.

Those who want to avail of the promo should buy two tickets for the film in order to get two additional movie tickets for kids. The free tickets can be used by children with the height of 4 feet and below.

An advance screening was held last September 3 at the SM Mall of Asia Director’s Club. KS