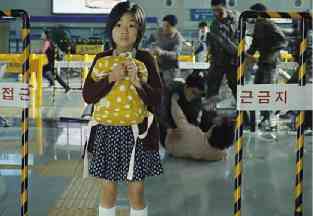 SU-AN (Kim Su-an) is unaware of the ensuing chaos behind her.

Engaging and genuinely scary, “Train to Busan” is a South Korean horror film that centers on an eclectic group of commuters who has no inkling that they’re in for a truly harrowing trip ahead—caused by the onset of a zombie apocalypse, no less!

The film by Yeon Sang-ho initially focuses on the cold relationship of a single father, Seok-woo (Gong Yoo), and his young daughter, Su-an (Kim Su-an), who wishes to celebrate her birthday by visiting her mother in Busan.

Eventually, other passengers are introduced, including the gruff Sang-hwa (Ma Dong-seok) and his pregnant wife, Seong-kyeong (Jung Yu-mi), as well as a group of teenage baseball players, and so on.

The father-daughter bond, as anticipated, gets repaired when escalating dangers threaten their train—among them an infected stowaway, who soon becomes a zombie,  and untrustworthy passengers who adjust terribly in the face of chaos.

Seok-Woo tells his daughter that she should, in times of trouble, look out for herself first—which goes against her kind and generous nature.

The film manages to compress those and other accessible conflicts, while stunning with otherworldly menaces. “World War Z’s” fast-moving zombies have got nothing on “Busan’s” creepy creatures. It’s like they’re on fast-forward, minus the heavy-handed CGI. 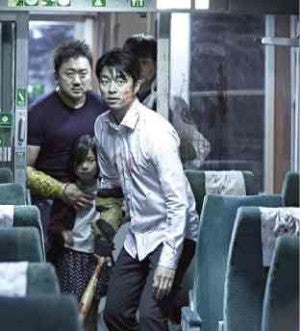 The zombie swarms are relentlessly machine-like—there are similarities with “The Walking Dead” in terms of how the monsters function, and resemblances with the human drama, but the setting and characters, however familiar, give the film a different flavor.

In so short a time, the live humans form “Lord of the Flies”-like factions. That part is reminiscent of the panic dramatized in the 2007 flick, “The Mist,” and offers a sharp, if brief, exploration of human nature.

The well-executed action scenes also give it a sense of immediacy, whether they take place in cramped quarters or open spaces—there’s a shifting and pervading feeling of inescapable phobias merging with every zombie attack.

Another important element that works in “Busan’s” favor is its well-timed humor. It elicits nervous giggles in spaces between palpable terror and resonant fear.