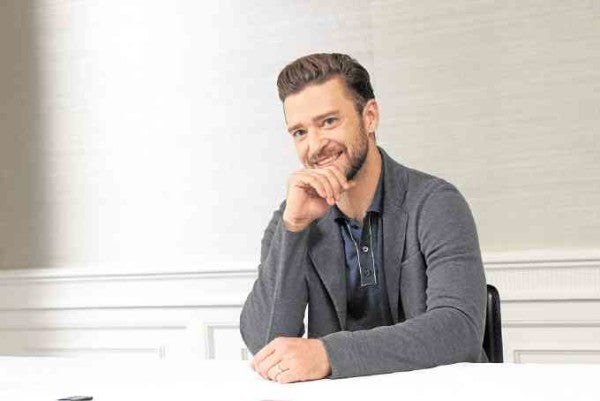 LOS ANGELES—Justin Timberlake, cool and relaxed in duds by Salvatore Ferragamo, walked into a meeting room at The London Hotel in West Hollywood with his hit, “Can’t Stop the Feeling,” blaring on the PA.

When the bouncy tune stopped playing, Justin mock-complained with a grin, “We didn’t even get to the chorus!”

Then, he added, “That was very nice.” With a sheepish smile, he quipped, “Thank you, Fox!” The studio is behind “Trolls,” the coming animated film for which he composed the song, served as the executive music producer (his first time) and voiced the grumpy doll character, Branch.

Anna Kendrick supplies the voice of Poppy, a perky troll. James Corden, Gwen Stefani, Zooey Deschanel, Russell Brand and many more make up the voice cast of the movie populated by those dolls with gravity-defying hair, which became all the craze in the ’80s and ’90s.

With characters who are grumpy, giddy, positive or Zen-like, our talk veered toward Justin’s moods.

We also chatted about his life as a dad to Silas Randall, his son (born in April 2015) with his wife, actress Jessica Biel. Their romance began at a Golden Globe Awards after party in 2007.

The couple recently hosted a star-studded fundraiser for presidential candidate Hillary Clinton at their LA home. They posted fun photo booth pics with Hillary from that luncheon where guests reportedly paid $33,000 each.

Hollywood’s glam pair worked on “The Devil and the Deep Blue Sea”—which marks Justin’s first time to score a film, while Jessica headlines a cast that includes Maisie Williams and Jason Sudeikis.

Justin turned somber and got choked up when he was asked about his “Alpha Dog” costar Anton Yelchin, who passed away last June.

When are you grumpy?

That moment is before I have my coffee in the morning. That’s when I am at my grumpiest. LA traffic also makes me grumpy. It was fun to play this character because I’ve never really gotten to play the grump. There’s a ton of irony there that Branch wants nothing to do with music (laughs).

Fatherhood is super scary. Because you don’t know what the hell you’re doing. But you figure things out as you go. It does give your life a different meaning, and lights you up in a way that you never imagined.

I feel like the real success of parenthood is getting to wake up the next day and fail all over again. It’s humbling, for sure.

Has your son inspired you to compose or create something for him?

You and Jessica recently hosted a fundraiser for Hillary Clinton in your home.

It was a luncheon. She’s just a brilliant person. I got that call from our management because Leo (DiCaprio) was unable to host it. We were happy to oblige. It was a new experience for me. It was kind of surreal.

You got Hillary to pose with both of you in the photo booth.

We asked her if we could post the photos. She said yes. I met Mrs. Clinton years ago. She’s been every bit as nice a person to me. She’s very relaxed. It seemed like she had a good time.

Woody Allen told us that he cast you in his next movie (still untitled) because he remembered you in “The Social Network” and found you “a very interesting actor.”

Well, I tricked the hell out of him then (laughs).

What does being happy mean to you?

People associate happiness with a smile. But we’ve all cried because we were so happy. The older you get, the more you start to realize that the smaller moments are the biggest memories you’re going to make.

What makes you truly happy?

The thing that makes me happiest is being with my son. It’s amazing. But it’s hard, and you don’t know what you’re doing. You just have to get into it.

What makes you happier—singing in a concert, composing or acting?

It’s hard to say what makes you feel more jovial than the other one. But if I had to pick one, there’s no way to describe the feeling of standing onstage and watching people sing a song that you wrote. That’s what I get to do for a living.

It’s the moment, especially the first time when you put a song out. When I performed “Can’t Stop the Feeling!” the first time, I watched how it made people respond—that’s probably the one that would cause you to have the most gratitude.

When was the last time you cried?

I’m a softie, man. They all run together. Just watching your son learn the smallest thing can bring you to that place. I become a mess.

Some kids danced in the aisles at a screening of “Trolls.”

Oh, that’s cool. That’s what we’re hoping—that kids get up and dance during the movie. I want the film to feel that joyous. I just hope they like the movie.

You did the score of “The Devil and the Deep Blue Sea.”

I worked on the score [of] that movie with another friend of mine. We collaborated.

The screening at the Tribeca Film Festival went well. Everyone responded to it. The movie has so much heart.

Is that one a “happy” movie?

Not like “Trolls” (laughs). No. The movie is about finding yourself, even when your whole world falls apart.

Why did you seem to cut back on acting projects?

From lack of time. I was on tour for almost two years. It felt like I was on it for five years. Then, having a child made me want to take a step back and see what that experience was all about. I still don’t know (laughs).

How’s your next album coming along?

I’ve been in and out of the studio a little bit here and there, just feeling my way through it. Everything’s still in the gestational stage.

I don’t like to rush it. But it is exciting. I feel like writing music for this “Trolls” movie opened me up to exploring different ways to write music, different styles and genres. What I’m doing right now is just exploring.

How do you react when, for example, you are in a car and you hear one of your songs?

Well, I listen to about the first half of it, because I wonder how much the compression from radio makes it sound differently from the final mix. Then, you torture yourself, thinking, that sounds too compressed.

But I also get to a place where I just let it go. That’s what art should be—in the moment. All you ever try to do is capture a feeling.

So, if you feel like you captured it in that moment, you just let it breathe. It’s also from having done this for a number of years. It’s a learned perspective, for sure, because it’s hard not to take everything personally. You realize that you can’t take it personally. Everybody’s got an opinion, and they’re happy to share it with you.

Can you talk about the late Anton Yelchin, whom you worked with in “Alpha Dog”?

That one’s going to be hard for me to talk about. Man, that’s a tough one. Sorry. He was a brilliant actor and an amazing human being. It’s one of those things that you can’t really answer the question.

TAGS: “Can’t Stop the Feeling, ” blaring on the PA., cool and relaxed in duds by Salvatore Ferragamo, Justin Timberlake, walked into a meeting room at The London Hotel in West Hollywood with his hit