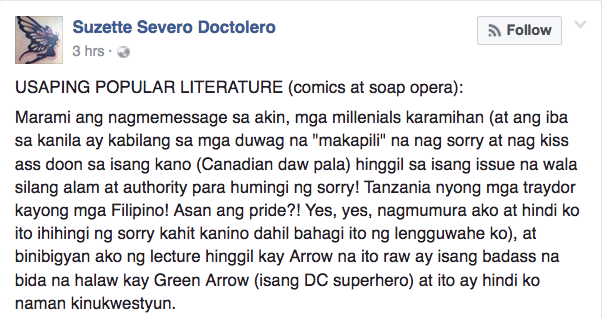 Suzette Severo Doctolero, headwriter for GMA Network Inc., shares her opinions regarding the negative reactions of fans and netizens regarding “Alyas Robin Hood’ and its similarity to “Arrow.” Image screen grabbed from Facebook

Amell’s post caught the attention of netizens who pointed out the similarities between the two shows. Some commented that the local series seemed like a “ripoff” of the American television series.

In reaction to the criticism and in a bid to shed light on how super hero characters are created, consultant and concept developer Suzette Severo Doctolero posted on Facebook her take on popular literature. She said it was directed to “millennials” who had been sending her private messages.

Doctolero pointed out that the character of Robin Hood has been the inspiration for many super heroes in popular literature, including Green Arrow of DC Comics. She also said that stories of super heroes are derived from master plots.

(What is a master plot? Please google because I’m not making this up. This is the origin story of existing stories, characters that are watched, read, seen in popular literature platforms such as popular novels, comics, movies, TV.)

Doctolero said no one holds the copyright for “Robin Hood.”

(DC doesn’t own the color green — we’re not green! — bow and arrow, okay? More importantly, they don’t own the copyright to Robin Hood — this is public domain —  so why say sorry?)

Jerald Uy, founder of GeekCraft Creative Solutions, responded to Doctolero’s post and said that generalizing comic book readers as collectively unaware and uninterested of other forms of literature is “fallacious.”

He also expressed disappointment at Doctolero for the foul words used in her posts as well as the way that criticisms were handled.

(What does this ill-tempered head writer know about what comic readers read? It’s fallacious to generalize that we don’t read other genres.)

“I disagree with the method/delivery of how you handle criticisms. This is now coming from a guy who have watched your shows,” he added

Doctolero also responded to Uy, debating him on the concept of popular literature. In one of her recent posts, she called him “pikon (touchy)” and accused him of attacking her first.

“I cant blame you though. My mouth is lethal, kaya nitong pumatay ng isang grupo ng mga (it can kill a group of) fanboys who thinks with their dingdongs. :) but believe me, kahit fatal ang bibig ko (even if my mouth is lethal) but my heart is so pure. Echos!” she said, adding that she is willing to send pizza and beer as peace offering.

Some supporters and members of the local comic book industry took offense when she said that the industry is now dead and that local comics are not considered literature.

Amell, despite posting the video that started the whole debate, appears to show no interest in the show.

“I have no idea what it is and frankly, I don’t care – at all – either way. But boy oh boy does it look familiar,” he said in a Q&A thread on Facebook. Alfred Bayle/JE/KS