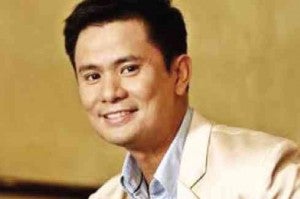 Singer-songwriter Ogie Alcasid and his wife, songbird Regine Velasquez, are celebrating their five years of blissful marriage this year, and their love for each other, he says, grows stronger than ever with each passing of day.

Alcasid, in an exclusive interview with Inquirer.net, reveals that the secret to their strong marriage is faith in God and in their relationship. It is their spirituality and devotion to the Lord that guide them to keeping their marriage strong, the OPM president added.

“It [our relationship] is very spiritual. We’re both very spiritual. What’s guided us and kept us in love with each other is our love for Christ. Simple lang kami, masaya sa bahay, puro katatawanan” Alcasid tells Inquirer.net while guesting on InqPOP session on Tuesday. InqPOP is the Inquirer Group’s pop culture platform that showcases local musical talents.

The former Bubble Gang mainstay revealed what he likes most in Regine. “My wife is very malambing. Lagi yang may regalo sa’kin, spoiler siya, eh,” he says.

Ogie and Regine had a roller coaster ride before they finally reached the altar. Since the start of their affair, intrigues had marred their relationship since Alcasid was previously married to former Australian beauty queen Michelle van Eimeren. Velasquez had not escaped public criticism since she dated the singer. However, in the latter part of their story, the couple showed that their family is at peace, and things are specially well between her and Eimeren. Both women proclaim  that they are the best of friends.

Read Next
Big Bang teams up with UNICEF for donation project
EDITORS' PICK
Powered by style, innovation and passion
Authors unbowed after gov’t ‘purge’ of books
Red-tagged green activist recalls imprisonment
‘FPJ’s Ang Probinsyano’ officially ends after nearly 7 years
A laptop that maximizes your WiFi so you can maximize your productivity
House energy committee chair Arroyo bats for cheap electricity
MOST READ
Arjo Atayde reveals proposal to Maine Mendoza was ‘more than a year’ in the making
Man, girlfriend found dead in Leyte river
‘FPJ’s Ang Probinsyano’ officially ends after nearly 7 years
Angelica Panganiban, Camille Prats recall ‘trauma’ of being called out for weight gain in ‘G-mik’
Follow @CAbanillaINQ on Twitter
Don't miss out on the latest news and information.