The power of two ‘Richards’

There’s no questioning that individually, Richard Poon and Richard Yap are stars. Over the years, both have earned success in their respective fields. The former is a multiplatinum-selling recording artist who is also in demand on concert stages here and abroad and tagged as the country’s Big Band Crooner. Meanwhile, the latter is a leading man whose participation in movies and teleseryes translates to box-office hits and ratings smashes.

The chinito crooners perform Frankie Valli’s Can’t Take My Eyes Off You at the presscon.

When two stars of their caliber come together, they’ll shine even brighter. That’s why their first co-headlining concert, titled Richard x Richard – The Chinito Crooners: A Salute to Classic Love Songs, is a can’t-miss event.

Produced by Cornerstone Concerts and Star Events in cooperation with Solaire Resort and Casino, Richard x Richard will be held on Friday, August 26, 8:00 PM at The Theater at Solaire. The concert will see the Richards pay tribute to songs that served as the soundtrack to many a timeless love story – perhaps even your own! (In fact, an insider says the repertoire was designed specifically to take concertgoers on a romantic trip down memory lane.)

The concept of Richard x Richard – The Chinito Crooners: A Salute to Classic Love Songs is truly perfect for both chinito crooners. Aside from the fact that they’re Chinese gentlemen who share a name, both have singing voices that are as wonderful as they are handsome. The concert’s producers also believed the two Richards would make a great combination on the concert stage because they cater to the same audience. 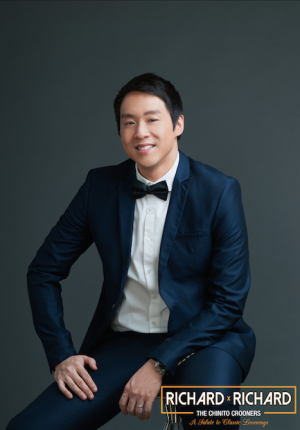 Richard Poon is no stranger to a sweet serenade. He started his career as part of a pop band, but it was only when he struck out on his own and shifted to singing big-band standards that he found success. He released three studio albums and a greatest-hits compilation under his previous record label before signing with Universal Records in 2013. His latest effort, The Crooner Sings Bacharach, features songwriter Burt Bacharach’s most romantic compositions – which Richard was able to interpret as tenderly as if he’d written them himself. 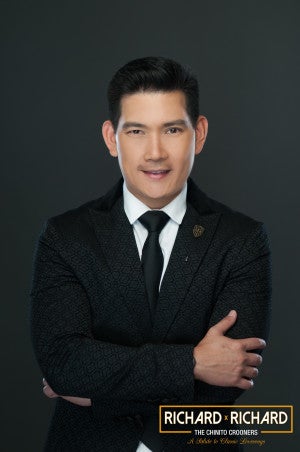 Richard Yap is no slouch in the pagpapakilig department, either. Best known for his star turns in the teleseryes My Binondo Girl and Be Careful With My Heart (the latter of which ran for two years), he has since gone on to star in Star Cinema’s The Achy Breaky Hearts, which earned over P100 million at the tills.

It was during a mall show for one of his previous projects that audiences first discovered that he could sing as well. A record deal with Star Music soon followed, and Richard released an album that featured pop ballads like “Don’t Know What to Say (Don’t Know What To Do” and “You Take My Breath Away.”

When people first found out about Richard x Richard – The Chinito Crooners: A Salute to Classic Love Songs earlier this year, they were thrilled. Their excitement grew when the two Richards revealed they were also recording an album together, which will be produced by Cornerstone Music in tandem with Star Music. That album is scheduled to hit stores soon. 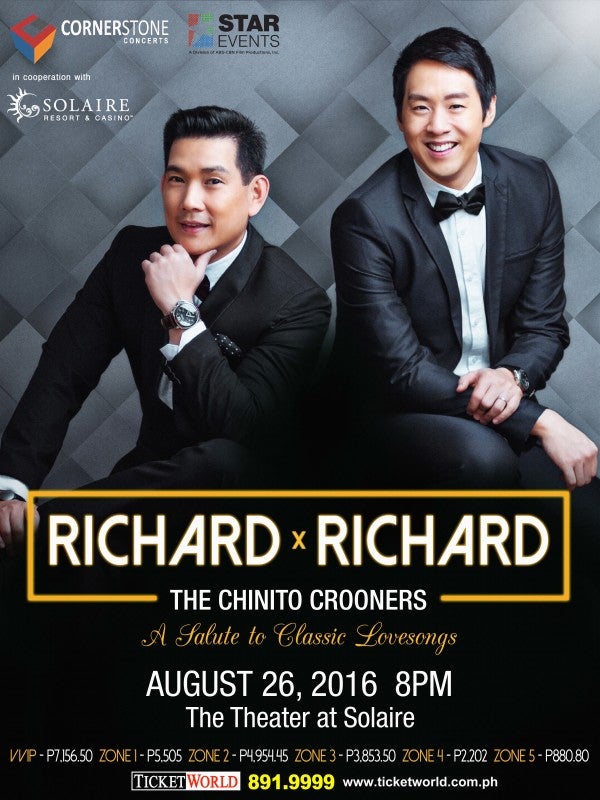 Richard x Richard – The Chinito Crooners: A Salute to Classic Love Songs will be directed by Dido Camara, with musical direction by Ria Villena Osorio. Special surprise friends from the entertainment circle are slated to guest in that one memorable night. ADVT.

For tickets, call Ticketworld at 891-9999 or log on to www.ticketworld.com.ph. Special thanks to Taverna Catering and The Felicidad Mansion.