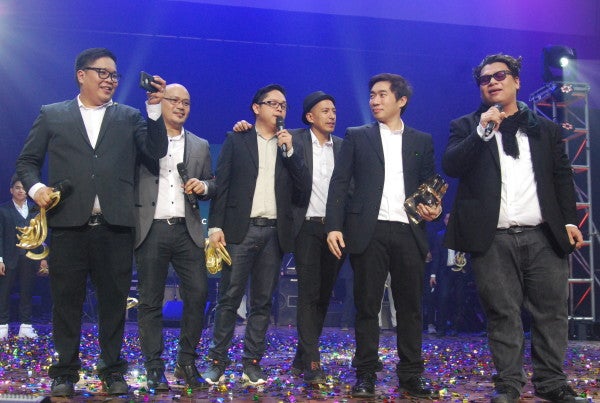 Back in high school, Jazz Nicolas, the drummer and vocalist of the pop-rock group Itchyworms, and his friend Wally Acolola, spent so much of their time in class writing songs that they ended up flunking chemistry.

On Saturday night’s PhilPop 2016 grand finals at the Kia Theatre, the longtime friends got their long overdue payoff.

“Turns out, failing that subject was worth it!” Nicolas told the Inquirer, shortly after he and Acolola were declared winners of the annual songwriting competition for their composition, the forceful piano rock ballad “Di Na Muli,” which bested 11 other song entries. “The feeling is indescribable, it’s unbelievable.”

“Jazz is my first songwriting partner. We have been best friends since we were in grade school. This is a dream come true,” added Acolola, who revealed that their song was initially not intended to be submitted to the contest. “It was a last minute decision. We just wrote the song for fun, or maybe give it to another artist.”

Under the spotlight and on the keyboards, Nicolas began the tune like a quiet, poignant lamentation, which eventually swelled into a jazz- and gospel-inflected climax that had the impassioned singer almost roaring the words out.

“I am very happy and grateful that I was able to do all these with people that are special to me,” said Nicolas, who at first wanted the song interpreted by the soul singer Kat Agarrado of the band SinoSikat. “The song is quite high, vocally demanding, so a female vocalist came to mind. But my band mates loved the song and eventually convinced me to do it.”

The Itchyworms has scored hits like “Love Team,” “Akin Ka Na Lang” and “Beer” since the group burst onto the mainstream scene back in 2005. But this recent victory, Nicolas said, has got to be one of his “best career achievements,” especially as a songwriter. “Usually aspirants use contests as a stepping stone—it is other way around for us.”

The feat was also a nod, Nicolas said, to his late father Sonny who was finalist in the 1981 Metropop contest. “Wally’s dad has also passed away…but I am sure that they are very proud of us, maybe even having a beer up there,” said Nicolas, who, together with Acolola, took home P1 million cash and a trophy designed by the acclaimed glass sculptor Ramon Orlina.
READ: PhilPop is more than just a songwriting competition

In second place was Soc Villanueva’s sultry, pop-R&B jam “Lahat,” which was performed by Jason Dy and likewise won the people’s choice trophy for amassing the most number of streams on the music platform Spotify. Completing the Top 3 were Paolo and Miguel Guico’s “Tinatangi”—an uplifting, folk-inspired anthem sung by Bayang Barrios and Cooky Chua, featuring The Benjamins band. The song also won best music video.

The results were determined by a pre-adjudication group—composed of musicians and industry insiders—which gave the finalists’ 60 percent of their scores. The other 40 percent, on the other hand, was marked based on the entries’ live performances. Gloc-9, Rico Blanco, Noel Cabangon, Joanna Ampil, and Maynilad COO Randolf Estrellado comprised the judging panel on finals night. 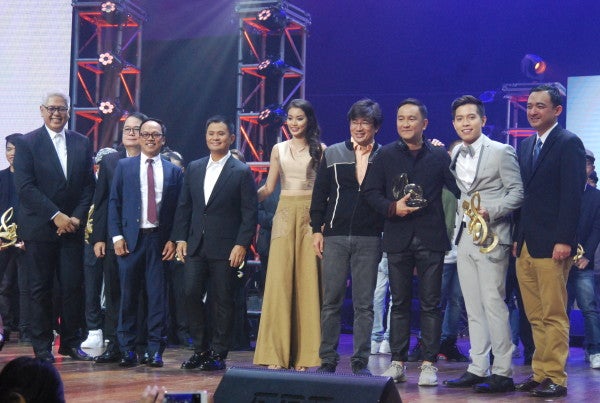