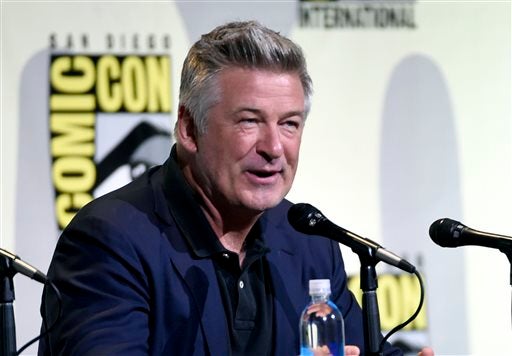 SAN DIEGO, United States—Widely regarded as one of the most polarizing figures in modern politics, Donald Trump has stoked a firestorm among Republican leaders and divided middle America.

But the real estate tycoon is also pitting brother against brother in one of Hollywood’s most famous families, veteran actor Alec Baldwin revealed on Thursday.

“I have one brother at the Republican convention. It’s okay — my other brother is there protesting Trump,” the actor told a laughing audience of around 4,000 at San Diego Comic-Con.

The revelation came during a surprise debut appearance by the actor at the annual fan event, to promote “Boss Baby,” the story of an infant who turns out to be a cunning businessman who can talk.

“My two brothers are on opposite sides of the political spectrum and I’m here wearing a diaper and telling people what to do,” the eldest Baldwin laughed.

The revelation led US presenter and comedian Chris Hardwick, who was hosting the Dreamworks panel, to quip: “There’s a Baldwin for every occasion. Bizarre.”

Baldwin didn’t say which of his three brothers was in Cleveland but Stephen has been a vocal Trump supporter since appearing on the GOP presidential candidate’s reality show, “The Apprentice.”

READ: Donald Trump: ‘We are going to win the presidency’

The 50-year-old, who starred in “The Usual Suspects,” has been giving supportive interviews from the Republican National Convention this week.

The anti-Trump brother is almost certainly “Backdraft” actor William Baldwin, who took part in a march in the city on Tuesday condemning police shootings of African-Americans.

“The vast majority of the cops are good and are well trained,” Baldwin told AFP during the demonstration, which was overshadowed by scuffles between rival protesters before Baldwin arrived.

“But I think police practices and procedures have to change. Have to. It doesn’t work.”

Alec hasn’t officially endorsed any presidential candidate, but he is not known for his love of “The Donald,” tweeting earlier this year that the entrepreneur “uses aggression and hyper-confidence to mask an inarticulate message like no other.”

Read Next
Comic-Con day one: Trolls, Trump and ‘totalitarianism’
EDITORS' PICK
Notice of 2020 regular meeting of stockholders June 18, 2020
SM prepares for ‘safe malling’
Leveling up your ‘lutong bahay’ with the kitchen companion you never knew you needed
NBI, Immigration to join hunt for ‘underground’ medical clinics
2 Chinese nationals arrested in raid on another unlicensed COVID-19 hospital in Pampanga
P2.2 trillion in losses: Cost of COVID-19 impact on PH economy
MOST READ
Revillame tells Roque: ABS-CBN is in my heart despite being in rival network
NCR is ready for GCQ — Palace
LOOK: Robredo, Vico Sotto, check Community Mart ops in Pasig
Año: Quarantine passes not needed in GCQ, movement restricted to essential travel
Don't miss out on the latest news and information.