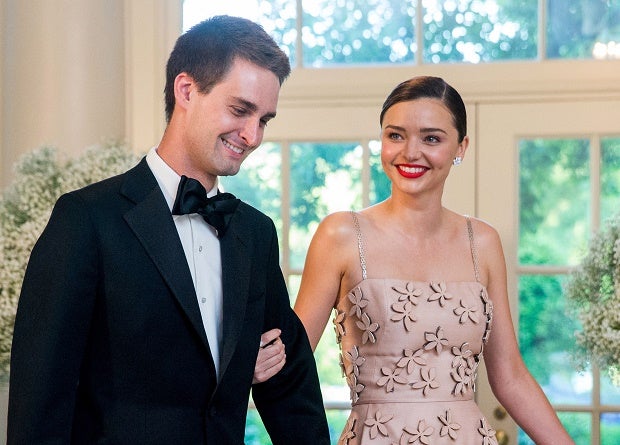 In this May 13, 2016 file photo, model Miranda Kerr, right, and her boyfriend, Snapchat CEO Evan Spiegel, arrive for a state dinner for Nordic leaders at the White House in Washington. Kerr announced on her Instagram account, Wednesday, July 20, that the couple are engaged. This will be the second marriage for Kerr, who was previously married to actor Orlando Bloom. They have a 5-year-old son together named Flynn. Spiegel, 26, has never been married. AP FILE PHOTO

The 33-year-old model is engaged to marry Snapchat co-founder and CEO Evan Spiegel.

She made the announcement on her Instagram account — using a Snapchat filter — on Wednesday, with a photo of a diamond ring and the caption “I said yes!!!”

This will be the second marriage for Kerr, who was previously married to actor Orlando Bloom. They have a 5-year-old son together.

Spiegel, 26, has never been married.

He co-created Snapchat when he was a student at Stanford University.