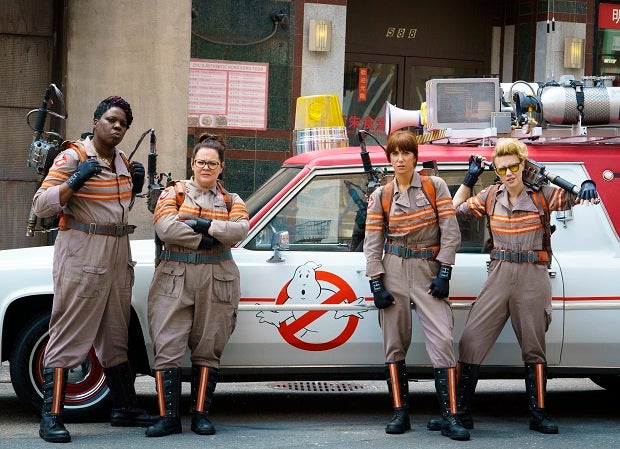 In this image released by Sony Pictures, from left, Leslie Jones, Melissa McCarthy, Kristen Wiig and Kate McKinnon appear in a scene from the film, “Ghostbusters.” Jones has left Twitter over racial abuse she received. AP

LOS ANGELES, United States — “Ghostbusters” star Leslie Jones says she has left Twitter because of “sickening” cyberbullies who were racially abusing her on the social network.

Jones, who is African American, was inundated by disturbing tweets over the weekend containing racial slurs, accusing her of being ugly and likening her to the recently-slain Cincinnati Zoo gorilla Harambe.

“I leave Twitter tonight with tears and a very sad heart. All this cause I did a movie. You can hate the movie but the shit I got today… wrong,” the Saturday Night Live comedian and actress said late Monday.

The torrent of abuse comes after the weekend US release of the movie, which has been lauded by critics but maligned by men who have accused its female stars of being unfunny and of having ruined their childhoods.

One troll wrote: “Don’t let #Ghostbusters bombing get you down. You’re a shoo-in to star in the Harambe motion picture as the man himself.”

The slur referred to the death of Harambe the gorilla, who was shot dead late May at the Cincinnati Zoo in Ohio after a three-year-old boy got into his enclosure.

“Twitter I understand you got free speech I get it. But there has to be some guidelines when you let (abuse) spread like that,” Jones said, describing the attacks as “evil.”

The fuming 48-year-old responded to the abuse by screenshotting and retweeting many of the slurs, saying they had made her “numb.”

“You have to hate yourself to put out that type of hate. I mean on my worst day I can’t think of this type of hate to put out,” she tweeted.

Twitter released a statement saying it had “taken action” on many of the accounts reported for abusing Jones.