entertainment / Indie
Indie
Only In Hollywood 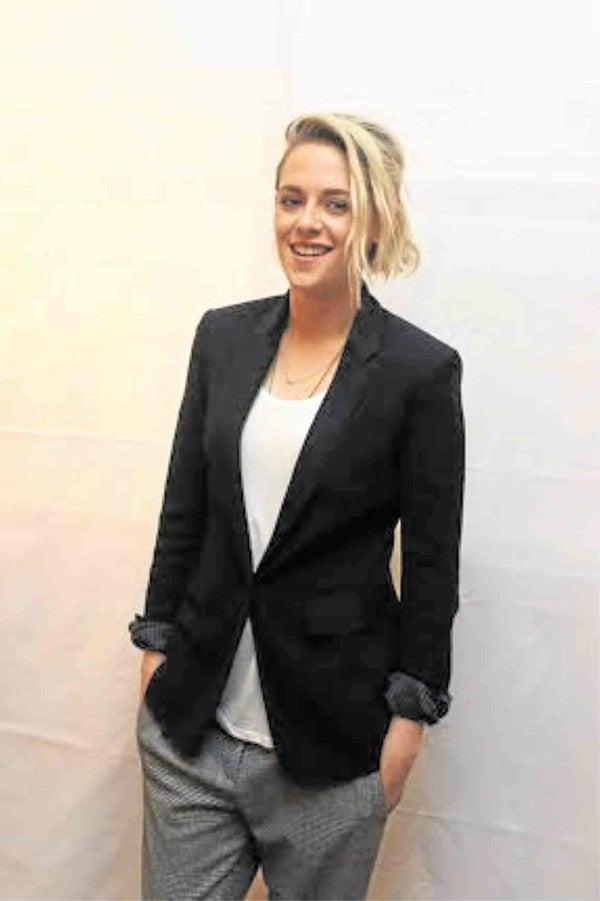 LOS ANGELES—The title is “Come Swim,” and she’s ready to shoot it in three weeks. Kristen Stewart disclosed details of her narrative directing debut in our chat at the Crosby Street Hotel in SoHo, New York.

The would-be director sheepishly explained the “X” stamped on her right wrist. “Oh, I didn’t have my ID last night,” she said. “I went to play pool, and they were like, ‘You cannot drink.’ I was like, ‘Fine, that’s fine.’  So, he (bouncer) put an X on my hand.”

Kristen recounted how “Come Swim” began. It will be her short film directing debut. In 2014, she codirected with David Ethan Shapiro a music video of the band, Sage + The Saints, for their song, “Take Me to the South.”

“I usually work in spurts,” she began. “I did five movies in a year and a half. I wrote a short story, like a poem that I’ve developed three years ago. I’m shooting it in three weeks. I’m so excited about it. We’re ready to go.”

Beaming, Kristen added: “I’ll probably act in a movie after that, but this (directing) is where I want to be. I’ve wanted to make movies since I was 9 years old. I don’t think there’s a huge divide between acting and directing.”

She shared what another actress-turned-director told her: “Jodie Foster said, when I told her I was going to make this movie, ‘The first thing you’re going to learn is that you don’t have much to learn—and that you’re totally ready.’ For her to say that, it feels good.”

Asked who is starring in “Come Swim,” Kristen replied, “My friend, Josh. He’s not an actor, but he’s incredible.” We did not get to ask Josh’s last name.

As for her film’s budget, Kristen grinned and quipped, “I’m not telling you.” “Come Swim” is part of an anthology of short films commissioned by Refinery29, a fashion and lifestyle website.

Kristen and 11 other female filmmakers, including “Empire’s” Gabourey Sidibe and Chloe Sevigny, were invited by Refinery29 to make films under its ShatterBox Anthology.

Kristen admitted that making “Come Swim” is one of the creative perks of fame. “I get to make a short film, and I’m not even paying for it,” she pointed out.

Our budding auteur is learning from some of the best filmmakers she’s had the privilege to work with: Woody Allen (“Café Society”), Ang Lee (“Billy Lynn’s Long Halftime Walk”) and Olivier Assayas (“Personal Shopper” and “Clouds of Sils Maria”), among others.

For her performance in “Clouds,” Kristen became the first American actress to win a Cesar, the French equivalent of the Oscars.

We asked Kristen about being directed by Woody for the first time in “Café Society,” a comedy-drama set in the 1930s.

“Like many of my favorite directors, but in his own unique way, he allows you to own your part,” the actress said of her legendary director. “I thought there was going to be more direction. It was like, once you said your line, in entirety or even not, you moved on. What that does for his movies is all of the poignant moments happen, then they hit you after the fact.”

Woody, known for his unusually brief casting meetings—lasting for only a few minutes—with actors, was just as quick with Kristen. In fact, the iconic filmmaker did not even meet the actress in person. She just sent a video.

“It was a phone call (with Woody) asking me to read a couple of scenes, and he thought I was good for the part,” Kristen recounted.

Asked if she would pick the same guy if she were in the same love triangle in real life, Kristen answered, “I have no idea. I feel like I always have to justify the decisions that my characters make in order to play them. I like Jesse a lot.”

Speaking of Jesse, when Kristen was reminded that they were also involved in a love triangle (with Ryan Reynolds, as the older guy, completing the troika) in “Adventureland,” she agreed: “Yeah, that’s true.  That’s weird.”

Of Jesse, with whom she also worked in “American Ultra,” making “Café Society”—the third time they are paired, Kristen commented, “I love Jesse.  He’s  a wonderful person. His intelligence is not off-putting; it’s like something that you want to keep up with. So, he makes me feel good.  I feel confident around him. I could just be the stupidest person around him, and he still likes me.”

Kristen recalled that being younger then, she and Jesse “had a lot more anxiety. I gave him cookies and stuff when he couldn’t eat, because he was nervous.

“We’ve calmed down a bit, which is nice, but we’re still the same. We have the exact same dynamic. We don’t hang out in between. But as soon as we see each other, what we have very naturally comes immediately.”

Kristen was also excited about “Billy Lynn’s Long Halftime Walk,” a drama that contrasts the realities of war with America’s perceptions, because of the pioneering technology that Ang used.

According to The Hollywood Reporter, “Billy Lynn” is the first major motion picture release to have been shot at a high frame rate of 120 frames-per-second 3D at 4K resolution and in high dynamic range (HDR). Films are usually shot at 24 frames per second.

The resulting movie is reportedly a fully immersive experience for moviegoers. “I can’t wait to see this movie because it’s been described to me as revolutionary, and has more information than our eyes have ever received in a given second,” Kristen pointed out.

“Being so out of my element on a movie set was strange, because that’s where I live. I usually know what’s going on. Joe (Alwyn), who plays the title character, was asking me questions because it was his first movie. It was bizarre.”

Also being eagerly awaited is “Personal Shopper,” for which Olivier won the best director award (he tied with Cristian Mungiu).

On this ghost story set in Paris’ fashion underworld, Kristen remarked, “I feel like the scariest parts of the movie are not the supernatural aspects. But it’s the questions that you ask about the afterlife or what life is in relation to the afterlife. And whether or not we’re alone or whether we live in the Matrix, and we’re making all this up.”

When Kristen was teased about how “competitive” she was when she and Jimmy Fallon played Twister, the classic contortion game but with Jell-O shots, in his show, she smiled and said, “It’s embarrassing. It’s just that I like playing games.” Well, she won.

What game does she enjoy playing? “Oh man, I love pool,” she said with a smile. “I’m obsessed with it.”

Looking back on those “Twilight” years, Kristen matter-of-factly talked about how the mania is dying down. She declared: “That fervor isn’t there anymore, which is nice.

“I just ran into Catherine Hardwicke (who directed the first movie in the franchise) the other day, and that sent me back. It was lovely to see her. It made me feel good.”

The “Twilight” topic brought to mind those years which kindled her relationship with her costar, Robert Pattinson. They split in 2013.

In 2015, Kristen was quoted as saying in a published interview, “Google me, I’m not hiding. I think in three or four years, there are going to be a whole lot more people who don’t think it’s necessary to figure out if you’re gay or straight. It’s like, just do your thing.”

In May, Kristen was reported to have broken up with French singer and musician, Stephanie “Soko” Sokolinski, after a few months of dating.

Asked if her heart has been broken like her character Vonnie’s in “Café Society,” she exclaimed, “Oh my God, I’ve been destroyed!”