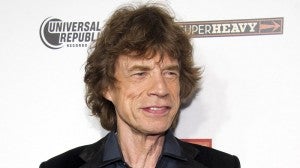 Now we all know what Adam Levine meant in his hit single “Moves like Jagger.”

Famed Rolling Stones frontman Mick Jagger is expecting his eighth child, his first with his 29-year-old ballerina girlfriend, Melanie Hamrick, according to a report from the Guardian.

The news was confirmed by representatives of the 72-year-old rock legend on Thursday (Friday in Manila).

Hamrick previously performed with the American Ballet Theatre in New York and started dating the English singer in 2014, the report said.

Jagger was formerly married to Bianca Jagger, with whom he had a daughter named Jade. He currently has seven children with four different women—Georgia, James, Jade, Elizabeth, Lucas, Karis and Gabriel—whose ages range from 17 to 45. He also has two grandchildren.

The band is scheduled to play the inaugural Desert Trip in Indio, California, in October, and will also perform at the Las Vegas T-Mobile Arena later in that month. Khristian Ibarrola