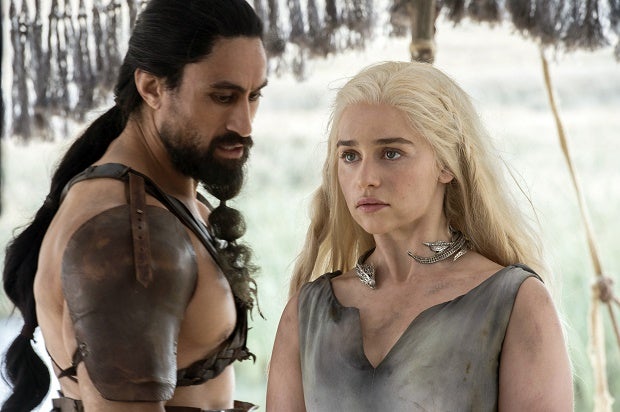 This image released by HBO shows Joe Naufahu, left, and Emilia Clarke in a scene from the season six premiere of “Game of Thrones.” On Thursday, July 14, 2016, Clarke was nominated for outstanding supporting actress in a drama series for her role. The 68th Primetime Emmy Awards will be broadcast live on ABC beginning at 8 p.m. ET on ABC. AP

LOS ANGELES — The Emmy Awards nominations told us what is already evident — the power and reputation of streaming services Netflix and Amazon are on the rise, and broadcast networks and even longtime premium cable star HBO are paying the price.

In Thursday’s announcement of prime-time Emmy contenders , television academy voters also signaled their regard for what people of color are bringing to the industry table: Each of the top acting categories included at least one minority nominee. It’s a reality the Oscars have failed to embrace in recent years.

Although HBO claimed the most nominations and the top nominee with fantasy epic “Game of Thrones,” the channel’s tally dropped from last year’s 126 nods to 94, a stunning change in what had been a steadily upward trajectory since its salad days of “Sex and the City” and “The Sopranos.”

Of the four major broadcast networks, ABC, CBS and Fox saw a drop in their positive Emmy feedback — with the exception, NBC, only holding year-to-year ground with 41 nominations.

In contrast, Netflix looked like a thoroughbred just starting to show what it can do. With buzz-provoking, critically acclaimed series including the political drama “House of Cards” and the multi-part documentary “Making a Murderer,” the service grabbed 54 nods, compared with 34 last year.

Amazon collected fewer accolades, but it still made gains, with 16 nods this year versus 12 in 2015. The groundbreaking transgender-themed comedy “Transparent” is its Emmy standard-bearer with 10 nominations, including best comedy series and best lead actor, Jeffrey Tambor, who won the trophy last year.

Broadcast and cable are far from irrelevant. ABC’s “black-ish,” which brought the African-American family comedy back to network TV and with a sharply relevant edge, received a best comedy nod and recognition for its stars, Tracee Ellis Ross and Anthony Anderson. He helped announce the awards live and read his show’s name with relish.

“I’m on cloud nine right now,” Anderson said afterward. “When hope becomes reality, that’s what it is. I was just a 9-year-old kid growing up in Compton, California, with a dream — and this is the dream that I had.”

Other minority actors recognized by TV academy voters include Viola Davis, the “How to Get Away with Murder” star who last year became the first woman of color to win a best drama actress trophy and was nominated again. So was “Empire” star Taraji P. Henson, while Aziz Ansari’s freshman comedy “Master of None” earned a top series nod and an acting nomination for him.

But there were no major nods for the stars of “Fresh Off the Boat” or other Asian-American actors, or for Latinos, which has been a recurrent Emmy pattern.

It’s a best limited series nominee in the strong field that includes “Fargo,” ”Roots,” ”American Crime” and “The Night Manager,” and earned six lead and supporting acting bids for its cast’s portrayal of well-known figures, including Courtney B. Vance as Johnnie Cochran, Sarah Paulson as Marcia Clark and Sterling K. Brown as prosecutor Christopher Darden.

In a telephone interview, Paulson said that despite joy over her recognition she was happiest to learn that Brown was nominated for his work.

“I jumped up and down …. more about that than about my own,” Paulson said. “I owe my performance whatever it is to him.”

“Game of Thrones,” which won a record 12 Emmys last fall including best drama, gets the chance to claim its second top award. “Veep,” last year’s best comedy series winner, also will get another shot at holding office and, with 17 nominations, was the comedy leader.

“Game of Thrones” and “Mr. Robot” will compete with “Better Call Saul,” ”Homeland,” ”House of Cards,” ”The Americans” and “Downton Abbey,” the last a nod for its farewell season. But the final season of “The Good Wife” was not recognized, and star Julianna Margulies also was snubbed.

The Americans,” which gained in attention last season, also earned top bids for its stars, Keri Russell and Matthew Rhys.

On the comedy side, “Veep,” ”black-ish” and “Master of None” will tussle for the trophy with five-time champ “Modern Family,” ”Transparent,” ”Silicon Valley” and “Unbreakable Kimmy Schmidt.”

A top acting nod for “Veep” star Julia Louis-Dreyfus, who plays a US vice president now elevated to the Oval Office, gives her the chance to score her fifth consecutive win and set a record.