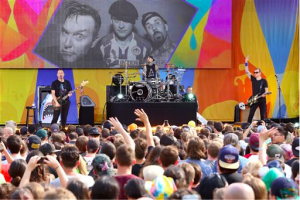 The beloved 90s pop-punk band’s comeback album debuted at No. 1 with over 186,000 equivalent units earned in the week, according to Nielsen Music.

Of that sum, 172,000 were in traditional album sales—the third-largest sales week for a rock album in 2016.

The band’s staggering sales numbers is also their biggest launch week since 2003, when its self-titled album bowed at No. 3 with 313,000 sold.

The new album was headlined by the single “Bored to Death,” which hit No. 1 on the alternative songs chart since July 9, marking the act’s first No. 1 on the list since 2004.

The Billboard 200 chart, meanwhile, ranks the most popular albums of the week in the US based on multi-metric consumption, which includes traditional album sales,  track equivalent albums (TEA) and streaming equivalent albums (SEA)

The new July 16-dated chart, where “California” is No. 1, will be posted in full to Billboard’s websites on Tuesday (Wednesday in Manila). Khristian Ibarrola