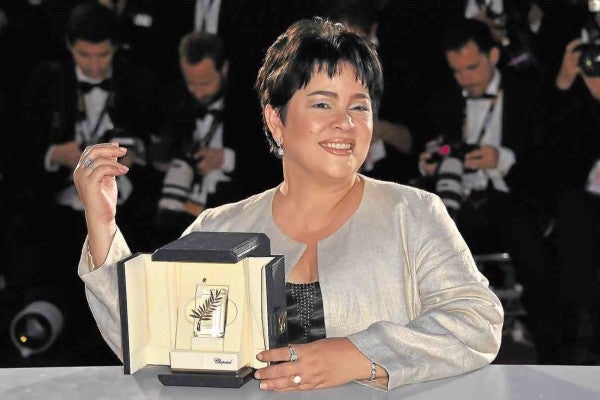 JOSE. A should-see in her Cannes-winning role.

Happily, the movie’s producers are doing just that, with its Philippine run to start on July 6. Make sure you catch it, to clear the issue up for yourself and prove that Jaclyn “deserves” the signal honor.

More on Jaclyn after her Cannes victory: Back home after that heady triumph, it’s business as usual for her, with teleserye outings that are sadly underwhelming and unchallenging, prompting her to act “with one hand tied behind her back.”

That must rankle, especially after her Cannes coup de estime, but welcome to the real world of local show biz. Still, we hope that another daunting thespic challenge comes Jaclyn’s way soon, to keep her hopes and spirits up.

We’ve already watched and enjoyed “Rak of Aegis,” but we want to catch it again, because “Miss Saigon” star Tanya Manalang is performing in its latest repeat run, her first stage outing in Filipino.

Quite a number of Filipino performers who make it abroad remain there to extend their careers on a global level, and Tanya could have easily done that. —But, she’s made it a point to come home and perform in a Filipino-language production, despite the transition pains involved. That should be encouraged and celebrated, right?

We hope that Tanya finds her “baptism of fire” productive and satisfying, and goes on to do other local shows, to give musical theater here a boost with her “international” cachet.

She could end up like other “Miss Saigon” alumni, Isay Alvarez and Robert Seña, who have not only performed in many Filipino musicals, but have also produced some of them—and even put up their own school for performers, the Spotlight Artists Center.

The current rom-com, “The Achy Breaky Hearts,” may be “just” a rom-com and compendium of trendy and quotable hugot lines. But, it’s a significant and “different” viewing experience, because its stars are all on the “wrong” side of 30 (and 40-plus).

Movies with relatively mature stars don’t make it big in these decidedly youth-oriented parts, so we’re hoping that this Jodi Sta. Maria, Ian Veneracion and Richard Yap costarrer will be a clear and strong exception to that dismally desultory rule.

Let’s all watch it, by all means—and help the production prove a significant point!