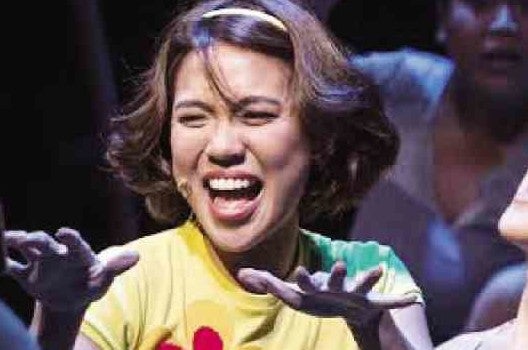 Even if you aren’t a fan of Aegis, you’re going to have an acute case of LSS (last song syndrome) and you will be humming their hugot tunes on the way home. “Rak” is hilarious and touching in equal parts. The brilliant cast members endear themselves to the audience almost effortlessly.

Aicelle Santos, who portrays the lead role, Aileen, is too amazing for words. It is impossible not to adore her. Bravo, AicellENT!

Here’s my chat with Aicelle:

Why do you think “Rak” is such a hit?

“Rak of Aegis” is very Pinoy. From the hit Aegis songs to the set, comic punchlines and attitiude of resiliency, everyone can relate to it. Plus, the “Rak” stage is bursting with Pinoy talent that one can truly be proud of.

What Aegis song can you identify with?

Coming from a simple family who’s gone through financial, marital struggles and ailments like cancer, we are survivors.

Life has taught me to be positive and keep my head up high always. And I’m truly thankful for the miracles and gift of faith the Lord [had given] me with. The song “Munting Pangarap” by Aegis speaks of this optimism in times of adversity.

What’s your fave scene and line in “Rak”?

My bubbly dream sequence  with Tolits on the boat remains to be my favorite scene. Fave line from Mercy (mom of Aileen): “When you hold something too tight it slips through your fingers (while holding rice grains to illustrate her point). Hold it

gently, and it won’t fall off.”

How has “Rak” transformed  you as a performer?

It taught me that being a performer isn’t about money, fame, looking or sounding good. Being onstage and commanding a crowd means you’re given an important task to tell a story and influence people.

And with that, I found my purpose: to spread love, light and God’s goodness in every performance.

How would you assess the state of Philippine theater these days?

Philippine theater is drawing more audiences now. That’s very good for the industry. I hope the time comes when they raise fees for the actors.

Do you plan to venture into Broadway and the West End?

I fall for a true gentleman who’s strong-willed and has a close relationship with God. Dishonest men should be eaten by wolves alive!

What comes first for you—love or career?

Both. It’s possible for both love life and career to flourish because I have a supportive boyfriend, Mark Zambrano (GMA 7 news reporter).

Do you and Mark have marriage plans?

We talk about marriage because we’re both of age already. We are praying about it.

Tell us about your album.

“Liwanag” is distributed by Homeworkz (Jay-R’s company). I wrote the song, “Liwanag.” The album is all about positivity and love.

Composed of all original songs, the album is also available for download on iTunes, Spotify, Deezer, Amazon and CD Baby.

Alden Richards has a cameo role in my music video, “Kapangyarihan ng Pag-ibig.”

It doesn’t get much attention, though, perhaps because  people find it too serious.

But I’m proud of this album. It’s something I want people to remember me by.

If your life story would be made into a stage play, what would the title be? “Liwanag/Light.”