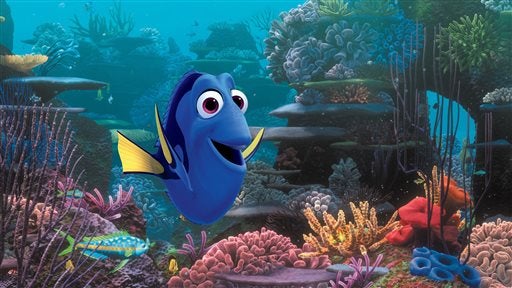 This image released by Disney shows the character Dory, voiced by Ellen DeGeneres, in a scene from “Finding Dory.” The Pixar sequel far-surpassed the already Ocean-sized expectations to take in $136.2 million, according to comScore estimates Sunday, June 19, 2016. AP

NEW YORK — The tidal wave of “Finding Dory” overwhelmed the sputtering sequel “Independence Day: Resurgence,” whose weekend debut was drowned out by the popular Pixar release in North American theaters.

In its second week, “Finding Dory” easily remained on top with an estimated $73.2 million, according to studio estimates Sunday. That far surpassed the $41.6 million opening of “Resurgence,” which debuted well off the pace off its 1996 original. The first “Independence Day” opened with $50.2 million, or about $77 million in inflation-adjusted dollars.

Of the week’s other debuts, the Blake Lively shark thriller “The Shallows” rode a wave of good reviews to a better-than-expected $16.7 million for Sony.