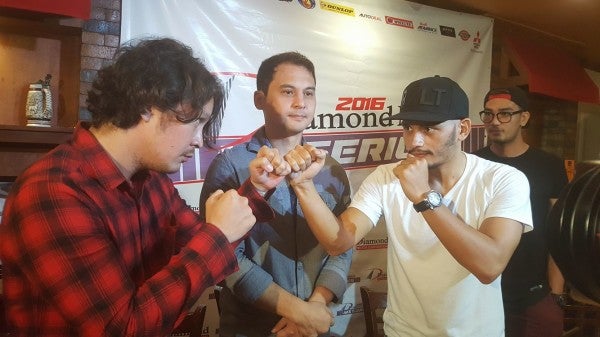 Who would have thought that a match that stemmed from a bar fight would eventually lead to something nobler?

A lot more is at stake when Baron Geisler and Kiko Matos face each other in an exhibition match in the first ever URCC Fight Night Saturday at Valkyrie.

Both camps have agreed that the proceeds of the event will be allocated for the bail of political prisoner Maricon Montajes, who has been in prison for six years now.

“Lahat ito mapupunta kay Maricon Montajes. She’s a political prisoner,” said Geisler on Tuesday during their appearance at the PSA Forum in Shakey’s Malate. “Naka-set na po yung bail niya. It’s all for a good cause.”

The 28-year-old Montajes, a film student in University of the Philippines – Diliman, has been in jail at the Batangas Provincial Jail since 2010.

Montajes together with Romiel Canete and Ronilo Baez were in an immersion in the rural community of Mabayabas, Taysan, Batangas when the 743rd Squadron of the Philippine Air Force took them into custody.

Geisler shared to the media his advocacy of helping these political prisoners gain freedom.

No stranger from being behind bars, the actor, who has a history of figuring in numerous bar fights, said he had developed a soft spot for these political prisoners after working with a number of filmmakers from the University of the Philippines.

“I understand these people and what they’re going through. Pag-ibig lang para sa lahat.”

Geisler also said he is hoping to help other victims who share the same plight, just like what he is doing now with Montajes.