‘The Conjuring 2’ spin-off ‘The Nun’ now in development 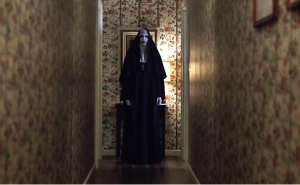 The demonic nun who spooked everyone off their seats in “Conjuring 2” has found a new film to haunt.

Coming of the success of the supernatural film over the weekend,  the studio behind the Conjuring franchise, New Line Cinema, will be thrusting the malevolent villain into the limelight with her own feature film, entitled ‘The Nun’.

Orphan writer David Leslie Johnson will reportedly pen the nun-centric spin-off, while Conjuring alumni James Wan and Peter Safran are set to produce, according to The Hollywood Reporter.

Interestingly enough, the hostile nun, whose name was revealed as ‘Valek’ in the latter part of the film, did not even exist up until bout three months before Conjuring 2 opened in cinemas.

“I felt like I was still discovering it [the character]. And believe it or not, I always knew that I was going to do additional photography,” Wan was quoted as saying in an earlier report with Inquisitr.com.  “So I was saving it because I was hoping I’d discover what that thing would look like as I was putting the movie together in post-production.”

The studio was ready to release the original version with a demonic entity with horns as its primary antagonist, up until Wan was struck by a revelation in the last minute. The director came up with a new concept involving a demon nun, which he then pitched to New Line.

Despite the sudden change, the studio approved and the art piece that Patrick Wilson’s character is painting in one of the scenes was altered digitally from the horned fiend to the demon nun.

The frantic character played a large role in the sequel as a malicious being that attacked Vera Farmiga’s character Lorraine Warren several times, as well as the British family which the film is centered around.

The planned spin-off is not a first for the supernatural thriller franchise, as the 2014 worldwide hit Annabelle was born directly from the success of “The Conjuring”, where the demon-possessed doll played a central figure in the film. New Line has also slated an Annabelle sequel for 2017.

Meanwhile, the “Conjuring 2” debuted  as the number one film in North America over the weekend, while also topping internationally outside of China.

The movie has already grossed over $100 million worldwide in five days of release. Khristian Ibarrola