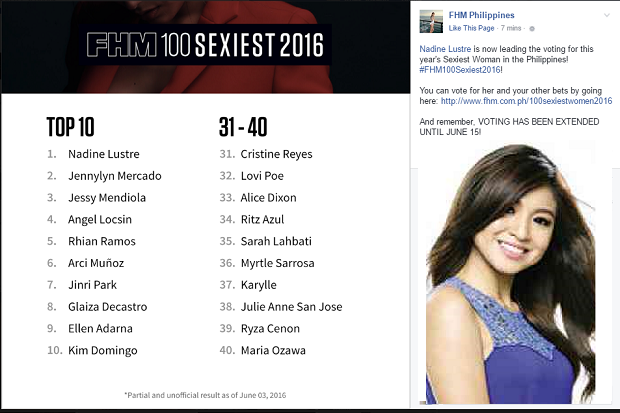 Actress Nadine Lustre is the front-runner in the FHM 100 Sexiest poll, according to partial results released by the local men’s magazine on Saturday.

Lustre is ahead of last year’s sexiest Jennylyn Mercado and Jessy Mendiola. Angel Locsin is in fourth place while Rhian Ramos copped fifth.

Lustre’s boyfriend James Reid does not seem happy with the news of his girlfriend topping the list.

On Twitter, Reid posted a screenshot of the list with the caption “HOY! Who is responsible for this!?!?!”—complete with a fuming emoji.

He added: “jadines, I thought we were on the same team.”

Fans of the reel and real life couple responded with humor, even urging Reid to “stay strong.”

In an interview, Reid said “no way” when asked about his opinion on Nadine doing sexy photoshoots.