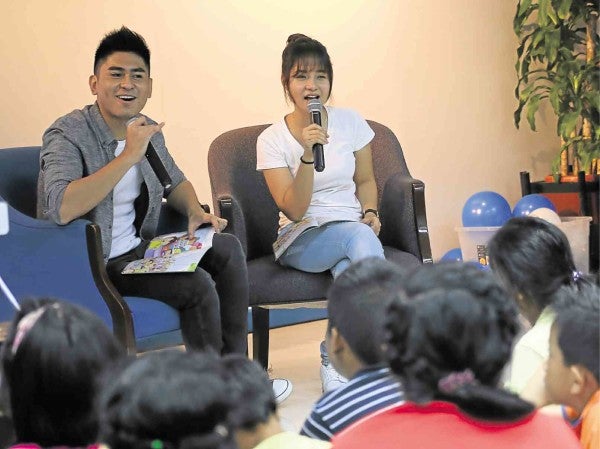 Unlike most TV personalities who shy away from social media websites to avoid online bashing, young talents Kristel Fulgar and CJ Navato said they have embraced the technology and benefited from it.

The video of the two Kapamilya stars performing their version of Charlie Puth and Meghan Trainor’s “Marvin Gaye” has gone viral only a few hours after it was uploaded on Facebook and YouTube in early May.

They recently uploaded their recording of “I Was Made for Loving You” by Tori Kelly and Ed Sheeran. The video garnered over a million views in less than a day after it was posted on Kristel’s Facebook site.

“I’m happy that people say only positive things about our videos,” Kristel said.

The two were among the celebrity storytellers of the Inquirer Read-Along’s ninth anniversary celebration on May 21.

CJ added: “I read some of the comments and they were really flattering. Some were surprised to see me sing. I’m happy that I get to share something new with my supporters.”

Kristel said she realized only recently how much influence social media sites wield. “There’s Internet in almost all areas of the country,” she pointed out. “People have shown their appreciation for what CJ and I are doing by  liking our videos and subscribing to my YouTube channel. They said they wanted us to record an album together.”

CJ said the best way to protect oneself from abuse was to simply ignore bashers. “I just want to show people that I’m more than just an actress,” said the 21-year-old Kristel. “I didn’t know then that I could act. I

just auditioned for a role and got to do one project after another, but I have loved singing since I was 2. It’s really important to me.”

For CJ, 19, singing helped him come out of his shell. “I used to be a shy guy, but I have always enjoyed singing,” he said. Kristel added: “That’s why I asked him to record songs with me. I’ve known him since our days in (the gag show) ‘Goin Bulilit.’ I know that he sings well.”

Kristel graduated with a bachelor’s degree in mass communication at the University of Santo Tomas last year. “I never stopped going to school even when my schedule got so hectic,” she said. “I promised my mom I’d get a diploma—and that’s what I did. I know that work in show biz isn’t permanent. I needed to have a backup.”

CJ, who is currently taking up hotel, restaurant and institution management at the De LaSalle-College of Saint Benilde, said he was considering shifting to engineering. “I’ve had a change of heart. I already took up a couple of subjects in engineering before pursuing HRM. I just want to go back to it,” CJ said, adding that he was striving to finish school for his family.