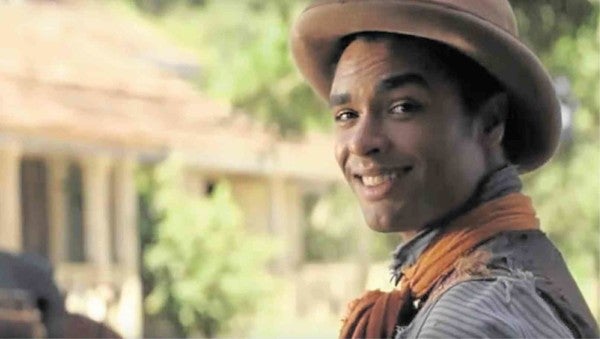 “I don’t generally tell people how old I am,” newcomer Regé-Jean Page, who stars in History Channel’s new “Roots” miniseries, politely declined revealing his age in a recent phone interview.

While in a park “somewhere in the middle of Los Angeles—the quietest place” he could find, the British-Zimbabwean actor, whose first name is pronounced as “reggae,” spoke about the show. It will be aired for four consecutive nights, starting May 31 at 9 p.m.

Page recounted, “I look to the previous performance… I watched the original series more than once, then tried to figure out who he was and how to best represent him.”

Playing the character was “a huge honor and responsibility,” according to Page: “It is a story already owned by millions of people, and so for me… to walk into their territory and provide something valuable to them [is] a great gift.”

The series about slavery costars Forest Whitaker, Anna Paquin and Laurence Fishburne. “They were brilliant, fantastic. I didn’t expect an incredibly high-quality cast—for me, it’s like going to a master class every day. I just watch the person opposite me, learn and try to keep up as much as I possibly can.

Other aspects behind the scenes were likewise inspiring, he added. “[It’s] incredibly passionate. I’ve never been on-set where every single person has a huge respect for it, and a desire to get it right.

“Roots,” originally a novel by Alex Haley, inspired a TV adaptation in 1977. “The world is different from 40 years ago,” Page said. “There’s been progress in terms of… knowledge. The global conversation of who we are has changed; television changed [dramatically]. We represent complex characters and stories.”

It’s an opportunity for new audiences to learn through a compelling family saga, he elaborated: “‘Roots’ is the story of how a family came to America in the 17th century and survived… It’s about a formation of American identity. You would understand the history of America more, particularly the African-American experience, but more universally, you’d understand the story of how people survived an incredibly unequal world.”

Page, who recently landed a role in the drama series, “Spark,” said that he is open to any character that piques his interest: “I quite like being surprised, the unexpected. I like things slightly uncomfortable.”

He would “absolutely” play a part in a fantasy or science-fiction film, Page told the Inquirer. “I don’t mind how we tell the story or what the story is. Fantasy and superhero stuff are equivalent to our mythology [now]!”

Page, who graduated from the UK’s Drama Centre three years ago, admitted that growing up, he never had acting influences or favorite movies: “I don’t have any, to be honest.  I told stories, sang, danced, got on the stage… I didn’t really have any idol. You know [the saying], ‘You’ll never meet your hero’? I took that to heart very early in life. I admire things, then I move on.”