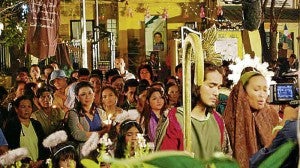 A scene from “Bisperas”

The Tokyo victory, the country’s first time to win in one of the world’s top festivals, further bolstered the Philippines’ reputation as the cinema-to-watch in the international circuit—especially since “Bisperas” beat out films from Indonesia, Japan, India and other festival darlings like Iran, South Korea and Thailand.

Moreover, the Tokyo triumph came hot on the heels of a slew of international awards for other Cinemalaya films, said director Jeturian.

“It feels great… Cinemalaya films have been winning left and right in the international circuit,” Jeturian beamed. “Our film’s win in Tokyo is particularly significant because the festival organizers have devoted an entire section there showcasing local indie films dubbed ‘Filipino Express: New Breeze from Cinemalaya.’”

Jeturian recalled that he attended the Tokyo fest with Marlon Rivera, who directed “Ang Babae sa Septic Tank,” another Cinemalaya film in the Filipino Express and Winds of Asia-Middle East sections.

“After the screening of ‘Bisperas,’ there was a forum with Marlon and me as resource persons,” Jeturian recounted. “The foreigners wanted to know whether indie films have an audience in our country. They were interested in the indies’ impact on the mainstream industry, too.”

Julia Clarete, who won best supporting actress for “Bisperas” at Cinemalaya, was ecstatic: “I know how cutting-edge and innovative the films are at the Tokyo fest… for our film to get noticed among the world’s best is special. I’m so happy for and proud of Direk Jeffrey.”

Raquel Villavicencio, who won best actress for “Bisperas” at Cinemalaya, was just as jubilant as Clarete: “Our film is deceptive in its simplicity. Looking deeper, it reflects in particular the psyche of the Filipino middle class, but is still universal in sensibility.”

The film zooms in on the inevitable unraveling of a dysfunctional family whose home was burglarized on Christmas Eve.

Villavicencio said: “I feel so proud and thrilled beyond words that our indie movies are besting foreign films in the international scene. It’s truly our time to shine.”

Producer Joji Alonso pointed out: “Every win is always a blessing. It’s a reaffirmation that we must be doing something right. But this award means more because it’s a first for the country at Tokyo.”

Alonso reported that Jeturian’s “Minsan Pa” in 2005 and “Kubrador” in 2006 were included in Tokyo’s Winds of Asia-Middle East section as well.

Alonso echoed Jeturian and Villavicencio’s sentiments. “The Tokyo win comes at a time when Filipino films are reaping awards all over. As I’ve always said, the Philippines will not get back into the ring with just one film. We need a wave of films to make an impact again.”

Alonso noted that it has been an exceptional year for “Bisperas”—which earlier won five awards, including best film, at the Directors’ Showcase section of Cinemalaya.

“I can only hope that we will have a repeat next year. Or an even better one. The ‘Bisperas’ team is very proud to have made a contribution, no matter how small,” Alonso remarked.

To sustain the winning streak, Jeturian and Alonso have agreed to use the $10,000 cash prize from Tokyo to finance their next indie film.