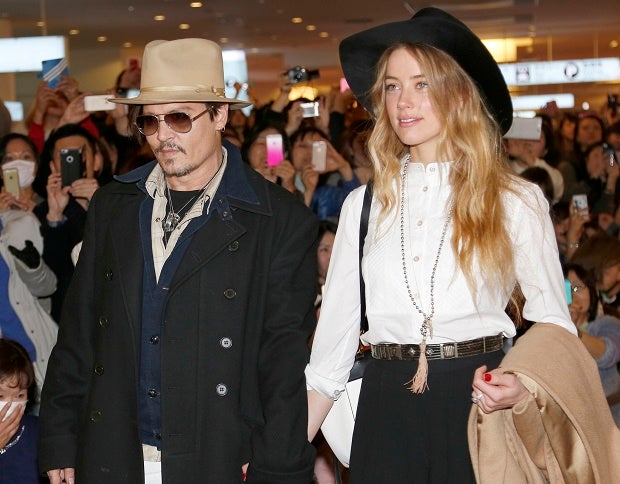 In this Jan. 26, 2015 file photo, US actor Johnny Depp and Amber Heard arrive at Haneda international airport in Tokyo to promote his latest film “Mortdecai.” Court records show Heard filed for divorce in Los Angeles Superior Court on Monday, May 23, 2016, citing irreconcilable differences. The pair were married in February 2015 and have no children together. AP FILE PHOTO

Amber Depp, an actress known as Amber Heard, filed for divorce in Los Angeles Superior Court and is seeking spousal support from the Oscar-nominated actor.

Heard listed their date of separation as Sunday. The pair has no children together.

Depp and Heard met while co-starring in the 2011 film “The Rum Diary.” Depp’s latest film, “Alice Through the Looking Glass,” is due to be released on Friday.

The actors have been embroiled in a dispute with Australia’s deputy prime minister, who last year threatened to euthanize their dogs, Boo and Pistol, after they were illegally smuggled into the country. Heard pleaded guilty last month to falsifying documents to conceal the pets when she arrived by private jet to join her husband on the set of the fifth movie in the “Pirates of the Caribbean” series.

The pair videotaped an apology as part of a deal that allowed Heard to avoid a conviction. But the actors have been derided because of their wooden deliveries in the film.

Earlier this week, the deputy prime minister, Barnaby Joyce, boasted that he had gotten inside Depp’s head like fictional serial killer Hannibal Lecter after the actor quipped that the ruddy-faced lawmaker appeared to be “inbred with a tomato” during an interview on the U.S. talk show “Jimmy Kimmel Live!”

Depp has one previous marriage and was in a long relationship with French actress and model Vanessa Paradis before he began dating Heard.

The divorce was first reported Wednesday by celebrity website TMZ.