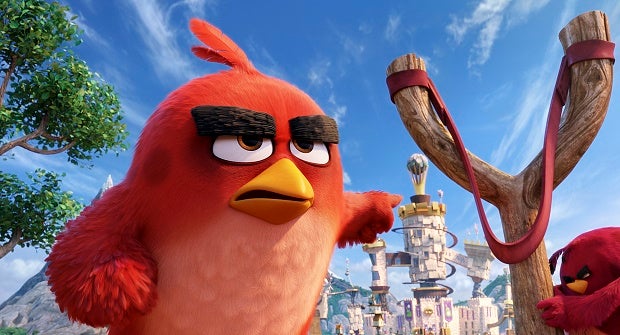 This image released by Sony Pictures shows the character Red, voiced by Jason Sudeikis, in a scene from “The Angry Birds Movie.”  AP

LOS ANGELES, United States — “The Angry Birds Movie” hopped to the top of the North American box office over the weekend, booting “Captain America” to second place, according to preliminary industry estimates Sunday.

The 3D animated take on the popular video game features a trio of flightless birds — Red, Chuck and Bomb — who take out their anger on an invasion of purple pigs.

That action-packed blockbuster and its cast of Marvel superheroes raked in another $33.1 million over the weekend for a cumulative total of $347.4 million after just three weeks in theaters.

A sequel to 2014 hit “Neighbors,” it flips that movie’s premise by having unruly sorority sisters — instead of frat brothers — turn the lives of their happily married neighbors upside down.

“The Nice Guys,” a detective mystery starring Ryan Gosling and Russell Crowe, came in fourth on its debut weekend with a box office take of $11.3 million.

Gosling and Crowe play a private eye and a hired enforcer on the hunt for a missing woman.

“The Jungle Book,” a remake of the Disney animated classic, slipped to fifth place its fifth week in theaters, taking in $11 million for a cumulative total of $327.5 million.