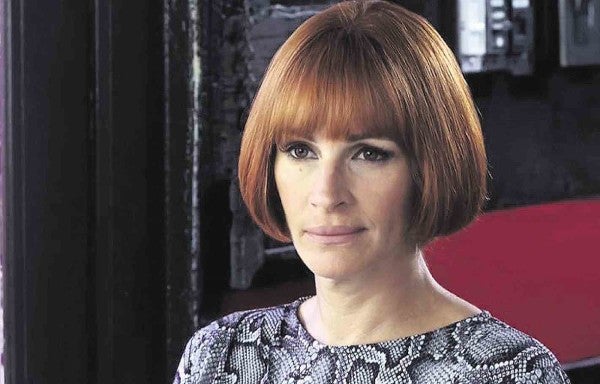 ROBERTS. Portrays career-oriented TV personality haunted by her past.

Films about mothers are an “occasional staple” of the movie industry, with new inputs and takes being trotted out serially in time for Mother’s Day.

How does the film hold up as a tribute to the most seminally influential woman in many people’s lives? The production tries to cover a lot of ground by opting for the “prismatic” approach, presenting not the usual main storyline, but a montage of protagonists, situations, relationships, conflicts, etc.

Despite this scattershot approach, most of the mothers in the movie are linked by the “friends and neighbors” device, and thus conveniently keep bumping into one another and getting involved in each other’s familial highs and lows.

The most well-developed “nuclear” story in the bunch is the one starring Kate Hudson and Sarah Chalke as sisters and neighbors. For decades now, they have been living as far away from their parents as possible, to escape their “control freak” mother’s penchant for running their lives.

But, one not so fine day, their folks surprise them with an unexpected visit—and all heck breaks loose:

Their “smothering mom” is shocked to retroactively learn that Chalke’s character is a lesbian with a similarly female spouse, and that Hudson is married to a doctor from India, with a “mixed-blood” son to show for it!

This is particularly a deal-breaker for the racist mother, but subsequent developments and complications finally knock some sense into her niggling, nagging and Neanderthal noggin!

Next in terms of detailed development is the story of a divorcee played by Jennifer Aniston, who has learned to be happy with her two sons—until her ex up and peremptorily announces that he’s gotten married again—to a hot, young thing!

Right away, Aniston’s carefully constructed house of “compromise” cards falls apart, and she has to finally face up to “issues” that have been left unsettled since “D-day.”

For her part, Julia Roberts portrays an unfeeling, career-oriented TV personality who turns out to have a huge and hurting issue of her own, which finally comes to the fore when “somebody” from her distant, long-forgotten” past comes back to “haunt” her.

Finally, Jason Sudeikis represents all of the “Mr. Moms” out there with his story—his wife died in combat in Iraq, and he’s left to bumblingly and bunglingly bring up their two daughters, until he learns his lessons—the hard way.

The film strives mightily to tie up all these substories and their many loose ends by its final fade with acceptable thematic clarity and pertinence—but, it’s an uphill struggle all the way.

The film needs a director who’s also a juggler—with 16 arms—to keep all of its plotting balls in the air. —An “impossible” task! But, some insights do emerge, so this latest Mother’s Day encomium gets—A for A-ffort.