Review: Clooney gets a conscience in ‘Money Monster’ 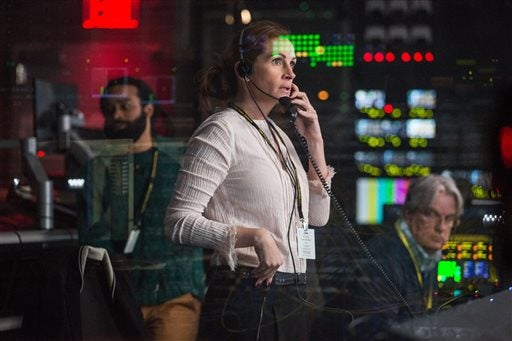 This image released by Sony Pictures shows Julia Roberts in a scene from “Money Monster,” opening in theaters nationwide on May 13. Atsushi Nishijima/TriStar Pictures-Sony Pictures via AP

Clooney’s character Lee Gates is one of those cable news stars who probably hasn’t spoken to a non-celebrity in decades. His flashy show opens with him in dancing in costume with two gyrating ladies at his side like he’s in his own rap video, and the vulgarity just escalates from there with ridiculous graphics and sound effects that even a shock jock radio host would likely find tasteless.

We see him being dismissive of the pleas from his put-upon producer Patty Fenn (Julia Roberts) to stick to the script, or at least give her a heads up as to where he’s planning to go, but Lee Gates is one of those roguish improvisational types who is somehow charismatic enough to get away with it. This is not really a likable guy, and it’s not even clear how smart a financial mind he is, but Clooney has that perfect combination of non-threatening smarm and swagger to make Lee not completely reprehensible.

It does, however, make it a little hard to care when Jack O’Connell’s character Kyle comes skulking in through the back of the set with a gun and a vest full of explosives made especially for Lee. Kyle, we find out, trusted Lee’s advice on an investment that went awry when a stable company’s stock plummeted and he lost everything. The company’s explanation and the narrative in the press is that it was just a computer glitch, but Kyle’s not buying it and wants some answers.

It’s an odd pairing, this somewhat daffy television dope against an unhinged blue collar fool with a hunch that $800 million didn’t just disappear because of a glitch. Although it doesn’t make for the most scintillating conversation, as Kyle wails about the system being rigged tension builds and it seems like perhaps “Money Monster” is heading somewhere significant — an all-out indictment of Wall Street corruption, maybe, that movies as different as “Margin Call” and “The Big Short” have done so well.

Instead, “Money Monster” stays rather small and fictional in its aim. It’s partially interested in the idea of systemic corruption in the finance world, sure, but it seems to be even more critical of the cable news media types who have grown soft, complacent and careless.

Foster, in the director’s chair for the fourth time, proves once again to be an assured and malleable in this role, ready to proficiently fulfill the needs of any genre with a steady, straightforward style. “Money Monster” feels like a solid ’90s studio thriller in some ways — a movie for adults and made by adults with a crop of charismatic A-listers at the center.

Clooney and Roberts, by the way, are very good together but hardly get any time to just be charming in this tightly-woven pic. It also seems like a cruel trick to have those two in a movie and to keep them in separate rooms for a large portion of it, communicating only through a speaker system as Patty attempts to “direct” the hostage situation from the control room. O’Connell, while committed, is playing too much of a working class stereotype to truly make an impact, and a third act turn really doesn’t help.

“Money Monster” might not be a great movie, but it is a comforting movie-movie that’s still fun to watch even if it whiffed on being something more.

“Money Monster,” a Sony Pictures release, is rated R by the Motion Picture Association of America for “language throughout, some sexuality and brief violence.” Running time: 90 minutes. Two and a half stars out of four.