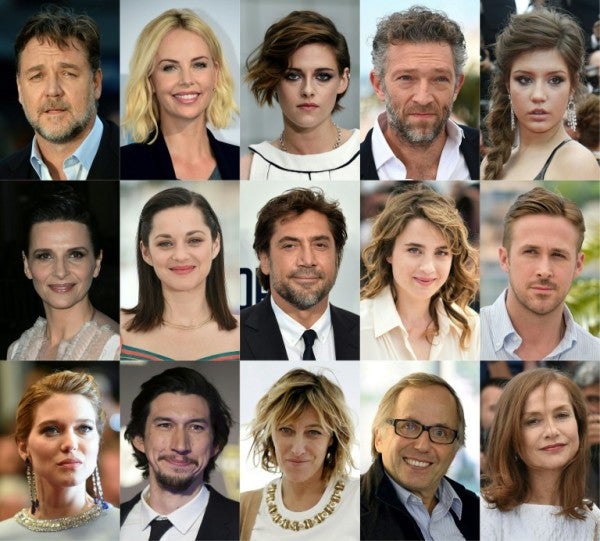 There will be no shortage of movie star royalty at the Cannes film festival, but the true queens of this year’s red carpet will be “Twilight” megastar turned indie darling Kristen Stewart and French film siren Marion Cotillard.

Both actresses are sweeping into the French resort town with two films in the official selection.

Cotillard, 40, who has become a transatlantic celebrity with an Oscar and several Hollywood blockbusters under her belt, will appear in two films in the running for the top prize, the Palme d’Or.

In “From the Land of the Moon”, set just after World War II, Cotillard stars as a woman caught in an unhappy marriage who falls in love again. She also stars in “It’s Only the End of the World” by French Canadian wunderkind Xavier Dolan, about a writer who returns home to tell his family he is dying.

While Cotillard was the first French actress since 1960 to win America’s highest acting award in 2008, Kristen Stewart became the first American actress ever to win France’s equivalent, the Cesar, in 2015, for her supporting role in “Clouds of Sils Maria”

Stewart, 26, became a celebrity icon for an entire generation as Bella in the blockbuster vampire romance-thriller trilogy “Twilight” but has gained a reputation for taking on passion projects, sometimes for little pay.

“I take part in successful productions to facilitate the existence of more modest films,” she told France’s Le Monde magazine.

This year she appears in the out-of-competition opening film, Woody Allen’s “Cafe Society”, about a young couple who fall in love in 1930s Hollywood.

She is also starring in “Personal Shopper”, a ghost story set in the Paris fashion world which is in the running for the Palme d’Or, teaming up again with “Sils Maria” director, France’s Olivier Assayas.

Stewart, a Los Angeles native, was first discovered by a talent scout who spotted her in a school play at the age of eight.

Her breakout role came opposite Jodie Foster in the 2002 thriller “Panic Room” and at 17 her career rocketed into the stratosphere when she landed the role of Bella Swan in “Twilight”.

Her relationship with “Twilight” co-star Robert Pattinson made her a tabloid favourite, particularly after she was pictured cheating on him with then-married director Rupert Sanders in 2012.

The festival will also feature young up-and-comers with plenty of celebrity blood in their veins, Lily-Rose Depp and Elle Fanning.

With parents like Hollywood superstar Johnny Depp and French singer and actress Vanessa Paradis, Lily-Rose was never going to fly under the radar, and the 16-year-old has already turned to acting and become the teenage face of Chanel.

She makes her Cannes debut as legendary American dance prodigy Isadora Duncan in “La Danseuse” (The Dancer) which will be shown in the “Un Certain Regard” section of the festival.

The young Depp made her cinema debut alongside her famous father in Kevin Smith’s 2014 horror comedy “Tusk”.

She also stars in the upcoming French drama “Planetarium” alongside Natalie Portman.

The film is being shown in competition and is Refn’s first at Cannes since his “Only God Forgives” was booed three years ago.

Elle Fanning is the younger sister of former child star Dakota Fanning. Her ascent into stardom began when she was just two years old, playing a younger version of her sister’s character in the 2001 Michelle Pfeiffer/Sean Penn film “I am Sam”.

She has also appeared in Sofia Coppola’s “Somewhere” and Francis Ford Coppola’s “Twixt”.

Another Cannes queen is American film star Kirsten Dunst, one of four women on the nine-member jury who will decide who wins the Palme d’Or, the top prize at the world’s most prestigious film festival.

Dunst, 34, lifted the best actress award at Cannes five years ago for her part in Lars von Trier’s “Melancholia”.

Like some of her fellow Cannes royalty, she was a child star before building a glittering career by mixing arthouse hits like “Interview with the Vampire” and “The Virgin Suicides” with the “Spider-Man” films.

She will soon be seen in “Woodshock”, a first foray into film-making for Los Angeles fashion designers Kate and Laura Mulleavy.