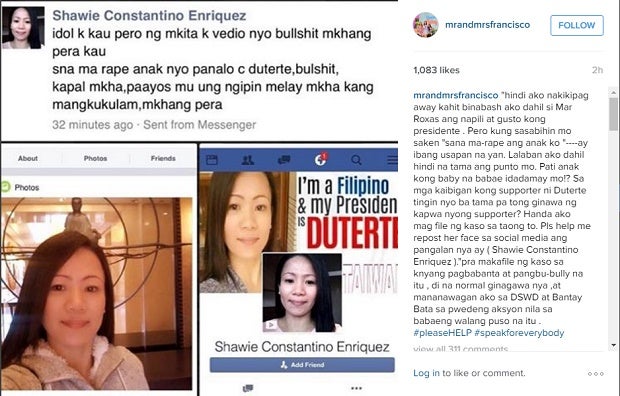 TV personality Melai Cantiveros posted a screengrab of an alleged supporter of presidential frontrunner Rodrigo Duterte and called her out. FROM THE INSTAGRAM PAGE OF MELAI CANTIVEROS AND HUSBAND JASON FRANCISCO

TV personality and host Melai Cantiveros took to Instagram on Sunday to voice her disgust with a supporter of presidential candidate and Davao City Mayor Rodrigo Duterte who had supposedly wished that her own daughter would be raped.

In her post, Cantiveros said that while she kept mum about being bashed on social media because she is backing administration candidate Manuel “Mar” Roxas II, she cannot just ignore the remark  by a certain Shawie Enriquez attacking her and her family.

Cantiveros and husband Jason Francisco are known Roxas supporters, having appeared in various ads for the former Interior secretary.

The TV celebrity then addressed the supporters of the feisty mayor.

Cantiveros  said that she was willing to file a case against Enriquez.

Duterte is currently the front-runner in various opinion polls despite drawing flak for his rape remark on Australian lay missionary Jacqueline Hamill in a recent campaign sortie.