John Prats’ vote is for his daughter 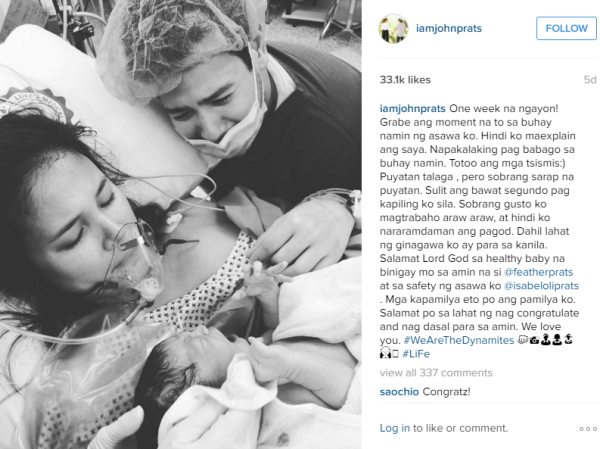 Fatherhood has irrevocably changed his life for the better, actor John Prats insisted.

“Feather gives us joy every day,” he told the Inquirer. “I am now more inspired to go to work. She pushes me to give my best all the time. After all, I am doing all this for my family.”

The hands-on dad doesn’t mind the sleepless nights at all. “I enjoy taking care of Feather a lot,” he said. After work, he takes over diaper duties from Isabel. “I’m in charge of the night shift, since Isabel takes care of Feather in the daytime.”

Luckily, his parents are on hand to “guide and support us every step of the way.”

The new dad has become more mindful of the country’s political situation, as well. “Now, I’m not only thinking of myself; I am also concerned about my child’s future,” he explained.

As a family, the Prats will troop to their Cainta precinct next week, to cast their vote.

John, however, is not publicly campaigning for any particular candidate. “My vote is my personal choice. I’d rather keep it to myself.”

Suffice it to say, he has a detailed checklist for the country’s next president.

“I want someone who will instill discipline among our countrymen,” he said as he enumerated the traits of his preferred leader. “But he or she should uphold justice, too. Someone who isn’t corrupt. Someone who’s knowledgeable about the economy. We need a statesman who can represent us well abroad.”

In his new indie film, Cesar Buendia’s “Diyos-Diyosan,” John is portraying the exact opposite: a student activist who grew up to become a crooked politician. He said that he didn’t have a specific “peg” and based his character, Sen. Bernard Mojica, on what was written in the script.

This socio-political film, which opens in theaters on May 4, “tackles issues we don’t usually see onscreen,” he said.

The film challenges viewers to take a good look at themselves and their reasons for voting, he pointed out. “We should study our choices carefully on election day.”

He feels strongly about the election as a first-time father who dreams of a better Philippines for his daughter.

“Change should start with us,” he asserted. “We shouldn’t look at our politicians as our salvation. We are our country’s hope.”