Bamboo gets by – with a little help from friends 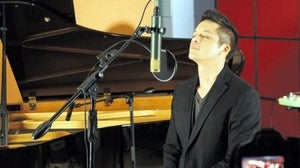 “CREATIVELY it wasn’t a joyous thing anymore,” says Bamboo on why he broke up the band that bears his name. His solo album, “No Water, No Moon,” is due for release this month.

The former front man of the hugely popular band Bamboo says he did “the right thing” that led to his group’s breakup.

Ten months after news of the split broke on radio and on Twitter, the band’s lead singer, Francisco “Bamboo” Mañalac, is on the phone – sounding upbeat and focused on the present. He just finished the shoot of a music video for “Questions,” the first single off his new solo album, “No Water, No Moon” (PolyEast Records), due for release by the end of this month.

“It’s actually a re-shoot,” he clarifies, indicating that he doesn’t mind going back to fix problems to get things right.

The song itself, he explains, is about searching for meaning (“a million more questions by the end of the day”), whose lyrics he himself wrote, along with 11 other tracks.

His former band mates – bassist Nathan Azarcon, guitarist Ira Cruz and drummer Vic Mercado – may no longer be with him, but Bamboo is not really alone on his latest incarnation. Keyboardist-arranger Ria Villena-Osorio, bassist Simon Tan, guitarist Kakoi Legaspi and drummer Junjun Regalado played on the album, and will be on board as Bamboo’s backup band during live performances.

“They were the first guys I asked to join me,” Bamboo says. They were, in fact, present – along with a 12-piece orchestra – at the recent Tanduay Rhum Rockfest which marked Bamboo’s first public appearance after returning from the United States.

He says he finished writing and recording the album in the States, where he also found time to do gigs with Filipino and American musicians.

Is there reason to believe, the Inquirer asks, that he tends to walk out on his bands when he gets into conflict with co-members?

Not true at all, he stresses. “In Rivermaya it was all too early for me … I was too young,” he says. “The interest and joy in being in a band were there, but I wanted to grow, go to school …”

But what about Bamboo the band? How true is it that he stopped talking to the other guys for two years, until they were technically fired?

“That was a different matter. Creatively it wasn’t a joyous thing anymore,” he says, adding that they had agreed among themselves to make the fun factor a priority if they were to last long.

Did the long hours on the road and the hectic tour schedule take away the fun?

No, it wasn’t a simple case of burnout, he points out. “This was our job, so we knew what we were going into.”

He explains that the Bamboo breakup was “one of the hardest decisions I had to make, but it was best for everyone concerned.”

But did he really act like the arrogant rock star, refusing to communicate with his buddies in the band, to the point that all he did was show up for gigs and leave after the last note was played?

He doesn’t want to recall whatever transpired and is quite careful with his words. “I’m now in a good place. I don’t want to be disrespectful to my former band mates. I had a good time with them. We did some great stuff…”

Instead he looks forward to playing again, and he sounds very sincere. When the Inquirer tells him that he might have caused the guys – who themselves are moving on together, with a new name, Hijo, and two new members – to struggle for sometime without a lead singer, Bamboo is incredulous. “There is something bigger out there. I wish them the best.”

While listening to “Questions” on YouTube, we slowly – like the song’s ruminative mood – understand Bamboo’s attempt to make sense of life: “We try to get away … hide … follow what we will find … a good excuse for a change in pace … It’s who we are …”

And while he also says that the answers “may never come our way,” the track has a way of making us feel happy – its sweet piano notes caressing our weary soul.

We imagine Bamboo breaking into a self-deprecating smile as he says, “It’s just one of those self-help songs.”