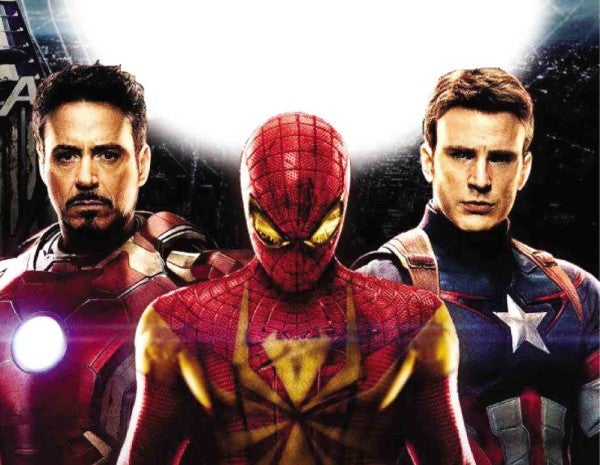 PICK A SIDE: Downey as Iron Man, Holland as Spider-Man and Evans as Captain America.

“BATMAN V SUPERMAN: Dawn of Justice” has its share of appealing elements, not the least of which are its modern-day reinvention of Wonder Woman (Gal Gadot) and Ben Affleck’s spot-on depiction of the Dark Knight.

But, for the most part, the wildly dissed DC film is weighed down by Zack Snyder’s heavy-handed treatment of its heroes-at-odds premise, and makes Superman (Henry Cavill), supposedly the mightiest superhero of all, appear petty and far from peerless. And Jesse Eisenberg as Lex Luthor—OK, let’s not go there. In any case, neither Martha (Kent or Wayne) would have approved!

Hot on the heels of “Dawn of Justice’s” generally reviled but record-smashing box-office finish comes Anthony and Joe Russo’s “Captain America: Civil War”—which makes DC’s movers and shakers look like amateurs. This is how not to kill a superhero franchise.

In fact, Steve Rogers aka Captain America (Chris Evans), Tony Stark aka Iron Man (Robert Downey Jr.) and their crime-busting pals pull off what’s perceived to be almost impossible for DC to do plausibly—turn the superheroes against each other sans needless twists and gimmicks that distract from the real gist of the story.

After a string of unrelenting crises, it’s almost inevitable for The Avengers not to turn against each other, as they mull about the morality of their unregulated, vigilante-style methodology—and the collateral damage wrought upon the victims they couldn’t save. Unfortunately, conflict breeds catastrophe.

The line is drawn between incorruptible Captain America, who nixes the idea of the team being governed by a UN-sanctioned bureaucracy, and the guilt-stricken Iron Man, who thinks it’s time for The Avengers to submit to government regulation.

As one of them aptly rationalizes, “Just because it’s the path of least resistance doesn’t mean it’s the wrong path!”

The questionable involvement of the highly polarizing Winter Soldier (Sebastian Stan) in a bombing incident that kills 17 victims, including the father of the Black Panther (Chadwick Boseman), drives a heftier wedge between Tony and Steve.

The dilemma is deceptively simple, but it’s also divisive—it reduces the group into two alliances that has the Black Widow (Scarlett Johansson), Falcon (Anthony Mackie), War Machine (Don Cheadle), Hawkeye (Jeremy Renner), Vision (Paul Bettany) and the Scarlet Witch (Elizabeth Olsen), each shown with his or her own highlights, picking a side!

The scenes aren’t as grim as those in “Dawn of Justice,” but the emotions are real and richly “relatable,” because of the well-delineated relationships between the superheroes.

The feeling of animosity is palpable because these are people who genuinely care for each other—so the fights feel like they’re waged by members of the same family! —We know only too well that the feeling of betrayal is stronger when it involves the people we love.

Evans explains it best to Entertainment Weekly: “Arguments with your family can be far worse than struggles with your enemy.”

Oh, and need we mention that a star-struck Ant-Man (Paul Rudd, providing hilarious quips that leaven the film’s tense proceedings) and a friendly neighborhood webslinger (a limber and lovable Tom Holland) are also cleverly introduced into the franchise to join in the rousing battle that ensues?

The performances are earnest, the thrilling special effects are impeccably realized, and the explosive action sequences are second to none. And it doesn’t hurt that the movie’s shocking revelations about the superheroes’ little-known or well-concealed pasts add more sense to the anger that drives each of them to stand his ground—and fight for what he believes in.

But, as they learn the hard way: Being a hero is not just knowing right from wrong—it’s also acknowledging when you make a mistake!