Two Pauls: One is Ant-Man, the other is Vision | Inquirer Entertainment

Two Pauls: One is Ant-Man, the other is Vision

LOS ANGELES—One is Ant-Man, the other is Vision. Both Pauls—Rudd and Bettany—costar in “Captain America: Civil War.” But in the movie’s warring factions of Marvel superheroes, Rudd’s “shrink-able” Scott Lang fights with Team Cap; Bettany’s red-purple visaged android sides with Team Iron Man.

Both actors have British parents. But Rudd was born in New Jersey, while Bettany is a native of London. Rudd has an open, humorous personality that makes him identifiable, like everyone’s bro. Bettany has the Brit reserve, but his self-deprecating humor is just as engaging.

In Anthony and Joe Russo’s epic that’s being hailed by early reviews as among the best from the Marvel Cinematic Universe (but be the judge), Rudd’s Ant-Man has one of the biggest and most applauded fight scenes.

Rudd is set to do “Ant-Man 2” with Peyton Reed back as director, while Bettany is going to shoot “Official Secrets,” a thriller-drama about a British whistle-blower. Bettany made his directing debut in 2014’s “Shelter,” which he also wrote, and starred his wife, Jennifer Connelly.

Excerpts from our separate chats with the two Pauls at The London West Hollywood: 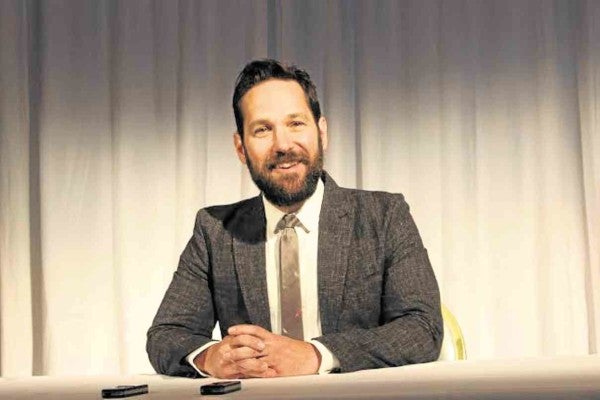 When do you begin filming “Ant-Man and the Wasp”?

We start shooting “Ant-Man 2” next summer. I’m starting to write it now.

Since “Ant-Man” came out, do more people come up to you?

Kids now know who I am. That’s new. People have seen “Ant-Man” so I don’t have to explain what his powers are anymore. It is a global phenomenon.

I’ve definitely noticed a difference, even going to my daughter’s school. She’s 6 and in kindergarten. The parents come in and talk about their jobs and I went in. It’s 5- and 6-year-olds and all they wanted to do was ask me questions about “Ant-Man” and “Civil War,” even at that age. So, that’s new. It’s crazy.

Is there a comic book series that you liked when you were a kid?

I didn’t read a bunch of these comics when I was a kid. There was about five minutes when I was drawn to “The Hulk,” but the comics that I got into when I was little were these English comics called “The Beano” and “The Dandy.”

Both my parents were British. My cousin would send over comics from England, and I liked the funny comics. The American comics that I got into were “Jughead,” “Betty and Veronica” and some of the Riverdale comics. I read “Archie’s Digest,” but most of what I read were English comics.

The “Sausage Party” trailer looks fun and raunchy. Even the unfinished version of the film shown at the SXSW Festival earned good reviews. Talk about the character that you are the voice of and the movie itself.

I play one of the few human beings in the movie. I’m the guy who works as a stock boy at the grocery store. I haven’t seen the movie, but I remember that when I read it, I was shocked. I thought, this is the craziest thing I’ve ever read. I’m really curious to see how the movie turned out, because I thought the script was hilarious.

There’s always the weird one when you’re standing at a urinal next to somebody, then he wants to shake your hand (laughs). It has happened. Or a selfie. Yeah, I’ve actually been standing at a urinal and somebody was trying to take his picture with me. I was like, come on! 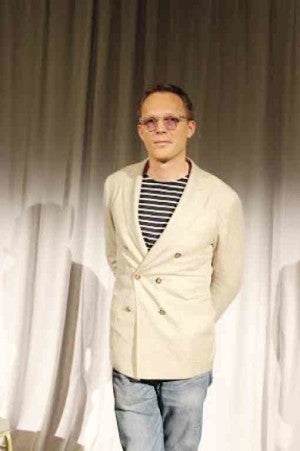 Can you address the rumors that you are being considered as the next James Bond?

That’s incredibly flattering. I think all those questions are very hard to answer without (1) seeming rather full of oneself and (2) really limiting your negotiating power if such a thing were true (laughs). But that’s lovely to hear.

What has made you the man you are today?

Wow. Well, lots and lots of things—definitely having children … and I lost a parent last year. They’re real watershed moments in your life, but then the infinitesimal tiny moments, chance happenings and meetings with people have also influenced me.

You’ve learned to ride a hoverboard. Will we see you scooting around Manhattan on one?

It’s unseemly of a man of my advanced years to be on a hoverboard around Manhattan (laughs), but yes, I have.

Yeah, I had to get to my car. We were staying in a friend’s apartment while our apartment had some work done on it. I woke up late, getting the kids up.

Jennifer was away and I thought, God, how am I going to get down to the garage where my car is and do the school run? I saw the kids’ hoverboard and went right on it. I hurtled down the West Side Highway. Luckily, it was very early, and there were no paparazzi.

It’s amazing to realize that people sometimes shake and cry, especially at events like Comic-Con or a premiere. They’ve been waiting so long, and they get incredibly emotional. If I’m totally honest, it’s quite alienating actually, because they’re not meeting you; they’re meeting a version of you that they’ve created from Wikipedia, images and the movies.

There have been times when I’ve thought, Oh my God, I’m going to get this person a cup of tea. Or like, “Are you all right?” You feel weird responsibility for that because they do have this relationship with someone who looks like you, but it’s not you. So, that’s odd.

Then sometimes, it’s just really lovely when people know and appreciate your work and as a director. People come up to you and talk to you about the movie (“Shelter”) that you made. People who were homeless have gotten in touch with me. They saw the film and found inspiration in it. That stuff’s moving. You feel very much in contact with the people who see your work, but then the other thing is overwhelmingly alienating.

Are there some elements of Vision, your character, that you take home with you?

Not really. I wish I had that calm and poise. Vision has much more of my wife in him than me (laughs).

With this character, there’s little. I’m a passionate human being who responds too quickly in situations. I’m not as mindful and thoughtful as I should be.

Like I say, it’s got more to do with my wife, who has an elegance and poise in moments where she can really count to 10 and breathe, and find her center. I don’t recognize that in myself at all.

What are your goals now?

I want to smile a lot (laughs). I really do. I want to enjoy myself. I feel very privileged to be in the position that I’m in. I feel blessed, and I want to continue to tell stories. I love telling stories, whether as a director, writer, actor or just sitting at a table at dinner.