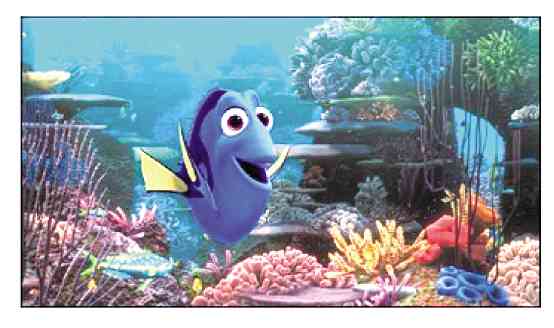 New talents are constantly advised to not get disappointed when they encounter rejection, and just be patient, because they will finally achieve their show biz dreams—if they persist and hold on to them!

That may sometimes look and feel like an impossible dream and fantasy, but some stars’ “eventual” success stories are held up to inspire them when the going goes really tough and dark.

The latest inspiring example with an eventual happy ending involves Ellen Degeneres, who costarred in the hit animated feature, “Finding Nemo,” more than a decade ago.

She “voice-acted” the ditzy character of Dory, the forgetful friend of the original film’s protagonist, Marlin.

After “Finding Nemo” became a certified hit, eventually grossing a really cool billion dollars, Degeneres started “comically” wishing aloud on her daily TV show that “somebody” would come up with a sequel to the blockbuster movie, this time focusing on her character, Dory!—She even had the “perfect” title for her dream project—“Finding Dory,” but of course!

At first, Ellen’s constant mentions of the dream sequel came off like a “running gag” on her show, just to make viewers laugh at her dogged and pushy persistence.

It appeared to be the height of improbability—and, indeed, a full decade passed before “something” finally started happening.

Fact is, it takes more than three years to come up with a new animated feature, so “something” was actually taking place “behind the scenes.”

So, Ellen’s “nagging” hints and even “threats” through the years were actually more than just comedically wishful thinking—but she sure played it for all of the “drama” it was worth!

Well, Degeneres’ really long and determined campaign is finally paying off on June 17, when “Finding Dory” starts its run worldwide.

Megged by Andrew Stanton, who also directed “Nemo,” the sequel extends the storytelling six months later, and focuses on Dory’s similarly eventful travels and travails, plus the characters she meets and interacts with in the briny deep.

Since it was established in the original movie that Dory is notorious for being ditzily distracted and forgetful, we expect that this idiosyncratic trait will figure strongly in “her” movie’s storytelling.

If things work out as well as Stanton and his army of artists and technicians hope they will, “Finding Dory” should “work” and “click” swimmingly well in its own right.

This early, in fact, Hollywood analysts and prognosticators predict (fingers crossed) that the sequel could match the very impressive gross earnings of “Finding Nemo.”

With a lot of even more plugging and “nagging” from Ellen for viewers to watch “her” film, she must be pleased and proud as punch to see that her seriocomic persistence has finally paid off—terrifically and “Dorifically” well!